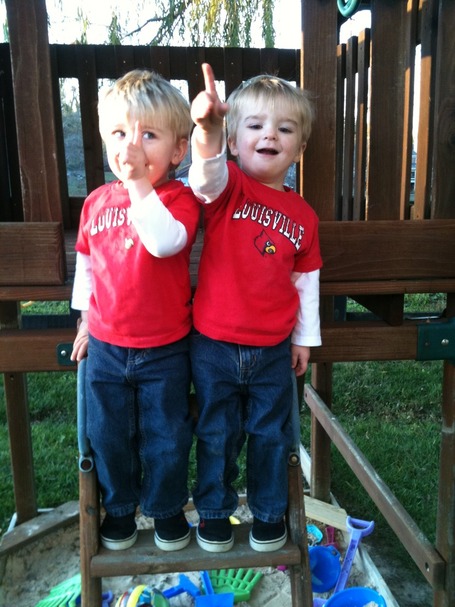 "The boys (Grayson and Gavin, 2) were pumped after our win Sat and took your wardrobe recommendation to heart. However, as you can tell by the picture, their fun crushing mother (and suspected Cat fan) made them put their pants back on. They soldiered on in their debauchery as only true Cardinal fans can. They did want me to pass along that no couches were harmed during their revelry."

Side note: If you've submitted a picture for consideration, we will get to you. I had no idea there were this many pets and children in the city of Louisville...or that much corresponding Cardinal apparel. I'm thrilled there are, and I'm thrilled there is.

The Cards jump to No. 2 in the new ESPN Big East power rankings.

2. Louisville (5-4, 3-1). The Cardinals have won three straight, and you could make the argument that they are playing the best football in the Big East right now after its huge win over West Virginia. But alas, they already lost to Cincinnati.

Seth Davis previews the Big East for Sports Illiustrated and pegs Louisville fourth in the league.

The Cardinals were one of the nation's most overachieving teams last season despite a rash of injuries that shortened their bench. Now, Rick Pitino's roster goes 16 deep. The most important of those is junior point guard Peyton Siva, who takes over for the graduated Edgar Sosa, but the front line will also be bolstered by the arrival of 6-7 freshman Chane Behanan.

The point about Edgar Sosa graduating last year is sort of like the 13th chime of a clock. Not only does it not make any sense, but it calls into question the validity of all the points (chimes) made before it.

Voting is in full swing for the Liberty Mutual college football coach of the year contest. You can vote for Mr. Charlie Strong right here.

There's a movement on Facebook wanting West Virginia to give the Braxton Trophy - which once went to the winner of the annual Louisville/West Virginia game - back to U of L.

The Braxton Trophy was brought about in 1989 by Coach Schnellenberger. That season, WVU was coming off a national championship loss to Notre Dame in t...he Fiesta Bowl the previous season and was returning QB Major Harris.  At the time, the Cards and the Mountaineers were both undefeated and it was the first real sellout home game of the Schnellenberger Era. Coach wanted to make this a big event and added the trophy, which was introduced by Sam Huff and Johnny Unitas. WVU won an exciting game in 1989 and U of L won a hard-fought game in Morgantown in 1990. The Braxton Trophy was initially located in the front lobby of the old Football Complex so everyone could see it, then it was later moved to the recruiting room with the Keg of Nails and the Fiesta Bowl Trophy. WVU got the trophy back in 1993 and has refused to play for it since.

Congratulations to senior All-American Colin Rolfe, who was named the College Soccer News and Top Drawer Soccer National Player of the Week in part because of his hat trick against Providence last weekend. The Cards return to the pitch on Friday at 5 p.m. for a Big East Tournament semifinal match against Connecticut. You can catch all the action from Red Bull Arena on the CBS Sports Network.

As far as the women's soccer team is concerned, they'll be hosting Dayton in the first round of the NCAA Tournament on Saturday night at 7 at Cardinal Park.

Peyton Siva has been named to the Naismith Trophy Preseason Watch List.

Of anything—outside of the three wins put together by the Cardinals—Graham understands what those sentiments mean as a first-year head coach, and as someone who has come into three different environments (Rice, Tulsa and now Pitt) to get players to buy into your system. Therefore, he obviously appreciates the job that Bridgewater is doing at Louisville right now.

"Very good poise, I love his comments," Graham said. "I think that’s something that tells you a lot. That’s what you have to do. I think Charlie Strong is as good as there is when it comes to things he’s emphasizing with his guys. It’s those type of values that they’re playing (with). He’s a freshman quarterback, and our defense knows what we have to do to be successful."

At least one media member in West Virginia is dubbing Saturday's game the "Meltdown in Morgantown."

And finally, a shot I dig: 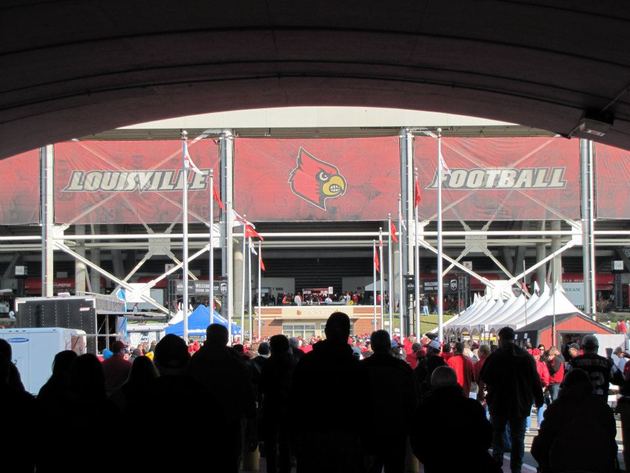 Hard to believe this time next week there will be no more home football for another year. Think about how long the offseason is and really enjoy Saturday.