My official game prediction was 31-14, Mountaineers, and my concern was that I was going too soft. About this time last week I started writing a post centered around the question of whether or not a win in Morgantown would be the program's biggest since the 2007 Orange Bowl. I scrapped it after a couple of paragraphs because the central hypothetical seemed too unrealistic.

It just seemed like Louisville was walking into a perfect storm. One of the youngest teams in the history of Louisville football going into what is already the most hostile environment in the Big East and one sure to be exacerbated by the recent bad blood between the two programs didn't seem like a real good deal for us. Plus you have the fact that West Virginia is probably the most overall skilled team in the conference, and that there was no possible way they could overlook a Cardinal team coming in riding a surprising two-game winning streak.

From an outsider's perspective, WVU -13 almost seemed like a gimmie cover.

But here we are. Louisville just beat a ranked team on the road, is riding a three-game winning streak, and is sitting alone in second place in the Big East.

My faith in the future didn't waver once during September or early October, but after the Cincinnati game I would have said this team losing three straight was infinitely more likely than it winning three straight.

The early losses were frustrating, but they were never frustrating because the team wasn't playing hard, and that effort is at the heart of this remarkable turnaround. These guys and their head coach never once thought about quitting on this season, and because of that they're now right in the thick of the conference title race and just one win away from bowl eligibility.

The pride we all have in our team right now is and should be extraordinary. We need to show that on Saturday.

I almost always fall on the "act like you've been there before" side of things, but after the weeks leading up to Saturday's game, I'm not going to pretend like I wasn't all about a little face-rubbing after the win.

If you feel bad about any of that, just remember that this was a two-way street we were driving on.

I mentioned that we christened the new CC Headquarters with a game watch party on Saturday. Well, following the victory we decided the best way to celebrate was to act like we were 19 again and shotgun beers in the backyard.

What followed was the worst collective group shotgun performance I've ever been a part of. 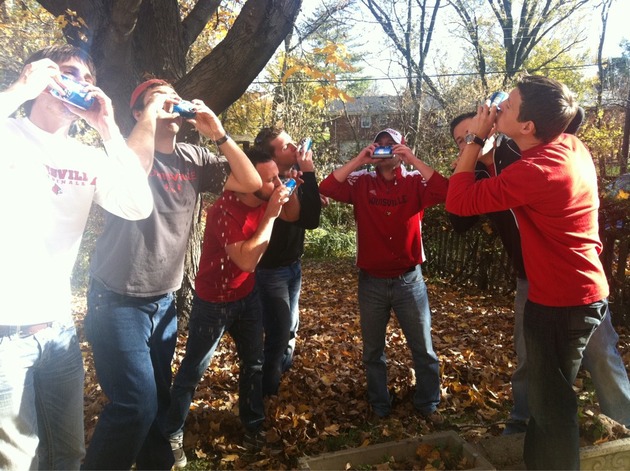 That picture does no justice to the amount of beer that ended up on the ground/clothing.

I think my favorite part was everyone slamming their empty cans on the ground just as we had in years past...and then picking them up seconds later because, come on, this is someone's home.

Don't ever grow up, kids.

The most remarkable aspect of Saturday to me was just how unphased this team was by the magnitude of everything. This was a team that played 17 freshmen and 14 sophomores, and you never would have known that they were facing a ranked rival on the road with bragging rights, life in the conference title race and possibly a bowl bid on the line.

From the pregame, to when the team ran out onto the field, to when West Virginia scored first on three plays, our guys never looked anything but confident. It was amazing to see.

Again, we should all be brimming with pride.

We've already talked enough about the postgame celebration pictures and videos, but seriously, how cool is that?

At least in my lifetime, we've never had a head coach at U of L in any sport who has been able to strike such a perfect balance of respect and admiration with his players. It's undeniably obvious that these guys love playing football for Charlie Strong and feel an extreme bond with him, but you also never doubt that they each know the repercussions of what will happen if they cross him or fail to live up to his standards.

I don't know how any parent of a recruit could watch the video of that locker room scene and not want their son to play football for coach Strong.

OK, whatever, I'm posting it again.

I think my favorite part is the unbridled joy on Will Stein's face when Strong makes the leap. Here's a proud kid who has stepped aside to make way for a superstar freshman, and he honestly could not care less because his team is winning. It's the type of genuine (no "fake juice") attitude that is responsible for just about every positive thing that has happened within this program over the past two and-a-half years.

Adrian Bushell: Boy am I glad we called that guy.

The blocked field goal was obviously one of the biggest game-changing plays I can remember, but Adrian also played a tremendous game in the secondary after it looked early on like we might not be able to cover anyone in blue and gold. He got burnt on that one double move in the fourth quarter, but aside from that he was pretty stellar.

It's a shame that the offensive line isn't receiving a level of praise now equal to the level of criticism they received during the first month of the year, because they have been tremendous during this winning streak. There was a moment in the first quarter after I'd seen Dominique Brown running through monster holes and Teddy Bridgewater having 6-7 seconds to read the field on play-action passes when I stopped and said outloud, "when did our line just get awesome?"

I said after the Marshall game that the season couldn't be salvaged if the line didn't improve tremendously between then and November, and that's exactly what has happened.

A monster tip of the cap to the big guys up front.

Dominique Brown still has a ways to go as far as his running back instincts are concerned (everyone said the same thing about Michael Bush his sophomore season), but his emergence since the Kentucky game could not have been more critical.

The field goal return changed the entire game without question, but there's a great chance that Louisville still doesn't win if Brown doesn't pick up that 4th and 1.

I continue to be amazed watching Teddy Bridgewater play. There's one point in every single game he's played where I've said to myself, "we've got this guy for at least two more years."

I think we all knew he was going to be special, but I'm not sure any of us could have expected him to be this special this soon. The plays he made to get the touchdown at the end of the first half and to convert that 3rd and 7 in the 4th quarter are the types of things that separate him from human freshman quarterbacks.

Punting game still terrifies me on both ends.

Should I die, God forbid, I'd like Mike Gleason to play some part in the proceedings. He provides a level of comfort that I can't fully explain nor completely understand.

So here we are: alone in second place in the Big East with three games left to play.

I love Charlie Strong, I love our players, I love this team.