Share All sharing options for: Teddy Bridgewater named national freshman of the week

Here's the word from U of L:

University of Louisville quarterback Teddy Bridgewater (Miami, Fla.) was named the Rivals.com National Freshman of the Week after his performance in the Cardinals' 38-35 win over No. 24/21 West Virginia on Saturday.

Bridgewater, who enrolled at Louisville in January, was 21-of-27 for a career-high 246 yards and a touchdown in leading Louisville to its first win over a ranked opponent since 2008. His 77.7 completion percentage was the 10th-best single-game mark in school history. 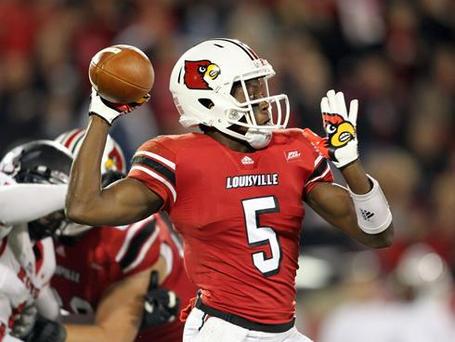 Making his sixth-straight start, Bridgewater threw his only touchdown pass of the game late in the second quarter when he connected with freshman Eli Rogers on a four-yard touchdown pass to tie the score at 21-21 with nine seconds remaining before half. Bridgewater completed passes to nine different receivers in the victory.

The true freshman has thrown for 1,275 yards and eight touchdowns this season and is completing 65.5 percent of his throws in leading the Cardinals to a 5-4 overall record and a 3-1 mark in the BIG EAST Conference.