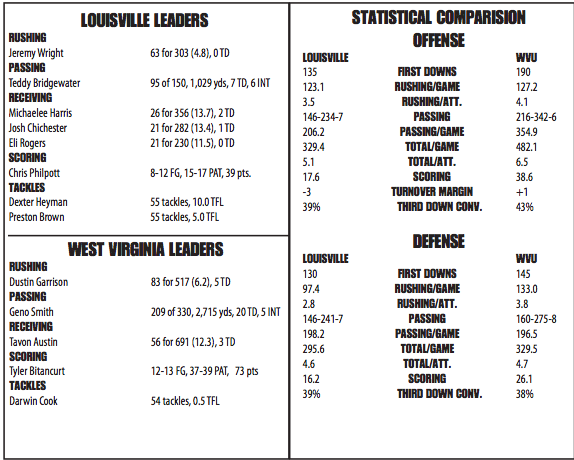 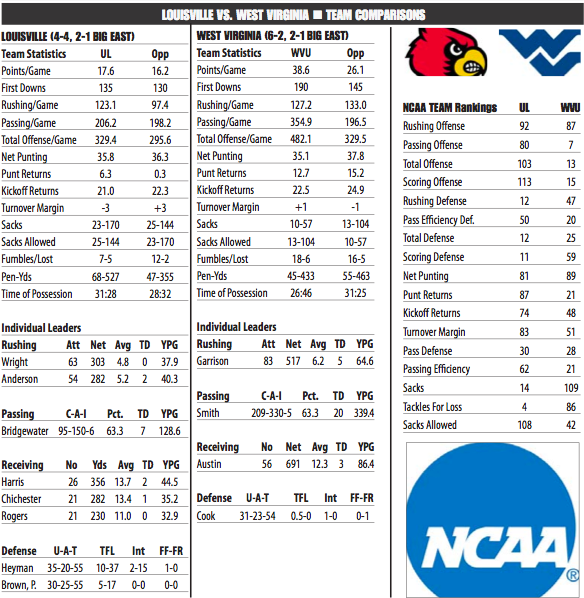 This game was going to be at least a nine before the week started, but everything that's happened over the past handful of days has added on a trio of tenths. Haven't been this geared up for a non-UK regular season game in a while.

Same thing again. Messing with the program's first two-game conference winning streak in five years would be beyond irresponsible.

Pregame Meal: Breakfast food (donuts, bagels, etc.), mimosas, bloody marys, beer. We're bringing the tailgate to the new CC Headquarters. Has the potential to be quite the christening.

Bold Prediction: Someone besides Teddy Bridgewater attempts a pass

Not saying it will be a thing of beauty...just sayin'.

It's hard to believe he's only a freshman

--Louisville will look for its first three-game league winning streak since 2006 against West Virginia. In 2006, the Cardinals closed the year with wins against USF, Pittsburgh and UConn to earn its first BCS bowl berth and Big East title.

--The Mountaineers have been crowned league champions in five of the last eight years and finished in second-place in 2006, 2008 and 2009.

--Eighteen true freshmen have seen action for Louisville this season. Eight have for West Virginia.

--Louisville has averaged 166 yards on the ground over the past two games, which is its best two-game output of the season. The Cardinals ran for 187 yards against Rutgers and 145 in the win against Syracuse. Louisville is 3-1 this season when running for a touchdown. Last year against West Virginia, Louisville only had 26 yards rushing.

--The Cardinals had a season-best 61-yard touchdown run by Victor Anderson last week against Syracuse.

--After holding a 14-0 lead at the end of one period against Syracuse last week, the Cards are now outscoring their opponents 48-17 in the first quarter this year, including a 27-0 spread over the last four games..

--West Virginia has finished no lower than second place in the BIG EAST Conference in each of the last nine years. Finishing 5-2 in 2010, West Virginia shared the BIG EAST league title with Connecticut and Pitt. That was the Mountaineers’ sixth title, the most of any school in the conference.

--Louisville is 3-0 when rushing for more than 150 yards and 1-4 when they fail to reach that plateau. The Cardinals rushed for 145 yards in last week's win over Syracuse

--Despite a strong defense, Louisville has generated only nine turnovers in eight games and owns a minus-3 turnover margin, second worst in the conference.

--West Virginia’s offense has been prolific all season averaging 482.1 yards per game and 38.6 ppg.

--The Mountaineers are outscoring opponents, 103-37, in the third quarter this season.

--West Virginia has scored on 90.0 percent (36/40) of its red zone drives in 2011. The Mountaineers are tied for No. 17 nationally in red zone offense. WVU only missed on four attempts in the red zone this season - two against Norfolk State, a missed field and a drive that ended on downs, an interception at Syracuse and at Rutgers when the half ended.

--The Cardinals are 1-5 under Charlie Strong when trailing after halftime and 0-7 when losing after three quarters.

--On the flip side, the Cardinals are 8-2 when leading after one, 8-4 when leading at the half and 10-4 when they have the lead after the third quarter.

--Louisville is 2-2 in November under Charlie Strong. That mark includes a 17-10 loss to West Virginia last season.

--"The Big East is challenging, and Louisville is coming to town with a two-game win streak. They've done something in the last two weeks that we haven't done this year. They beat Syracuse and Rutgers, which are two pretty good teams. They'll come in here ready to go. They're big. They're physical. They're talented." --Dana Holgorsen

--"If we let (Geno Smith) sit back there and see us in cover-2, it’s going to be a long day at the ballpark for our secondary. We’ve got to move around, disguise things, pressure, drop eight — we’ve got to do it all to have a chance to win the game." --Vance Bedford

--"As always, West Virginia is very, very explosive. They're a team that can hang 50 or 60 points on you if you let them. One thing we've struggled with this year is eliminating the big play and that's something we have to do against them. We're going to have to strap on our boots and go in there and play one of our best games." --Dexter Heyman

--"The Cardinals are big and they're strong. They're talented, athletic, and they'll come in here ready to go." --Holgorsen

--"They're so explosive. Austin and Bailey, they get the ball in those guys' hands and they're just so fast they outrun people. They take a 5-yard hitch route and turn it into a 65-70-yard run." --Charlie Strong

--"Whether they’re going to try and pound us with the run game and play action us … they have that in their game. They run a lot of different things out of the Pistol, we’re going to see more option than we’ve probably seen all year and they’ve hurt people with it, so their versatile. I’m sure they’re taking a look at us and saying let’s go and attack them with the running game." --West Virginia defensive coordinator Jeff Casteel

--"My confidence is unbelievable with this ballclub." --Heyman

--"It starts with coaching. Charlie Strong has been as well-respected of a defensive coordinator as there’s been in the profession for the last two decades. The guy’s won two national championships (as an assistant with Florida) and has been a part of some good programs being the defensive coordinator. That tells you something." --Holgorsen

--"I always thought there was a target on our backs simply because we were the preseason favorites and all that stuff. None of that matters, but obviously other teams feel like they have something to say about that. We have to know that teams are going to give us their best shot every week.'' --WVU QB Geno Smith

--"You've got to be aggressive. Knock people back. Knock people down. You get knocked around and don't take advantage of opportunities you're going to play like we did in the first half [against Rutgers]. To the kids' credit, they did really a good job of coming back. It was cold. You're 10 points down. The kids could've folded the tent. They fought back. That's hopefully something they can build on." --Casteel

--''West Virginia is a solid team and we're just coming out here to play and to end that streak of four years that they have on us." --Josh Chichester

--''We're preparing the same way we do every week. We're getting ready for a tough opponent. Those guys are going to come in here fired up, so we have to be ready to play those guys.'' --Geno Smith

--"[Bridgewater] is a freshman so hopefully he'll get rattled a little bit but he's a good athlete.  He'll be really good in the future so we have to jump on him quick while he's a freshman and try and take advantage of that." --WVU defensive end Bruce Irvin

This is a game where we could play very well and still lose fairly handily. I really, really hope I'm wrong, but it just feels like we're walking into a bad situation here.

If I'm completely wrong...blacked out by five.