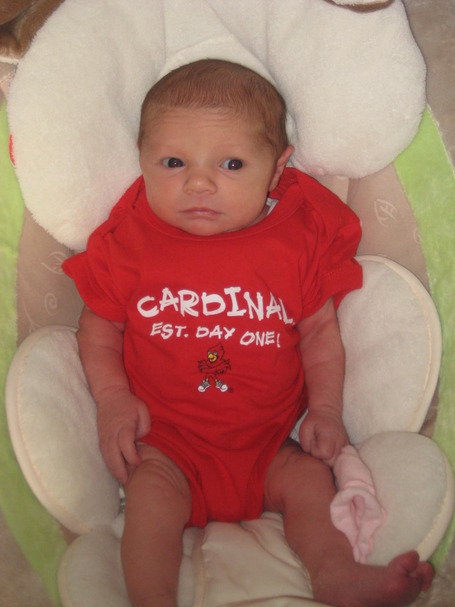 Brooklyn Olivia Johnson isn't entirely sold on the notion of the Cards' BCS chances resting on the shoulders of another team. That's all right, she will have accepted it by the time she turns three weeks. They always do.

Monique Reid scored 18 points as the Louisville women blasted Murray State 105-62 last night at the Yum Center. The Cards can now turn their full attention to Sunday's game against Kentucky in Lexington.

If you're looking for a rooting interest in tomorrow night's West Virginia/South Florida game, remember that a Mountaineer victory eliminates any chance of Cincinnati going to the BCS, essentially leaving the Bearcats with nothing to play for on Saturday. Connecticut is 5-6 and will be fighting for bowl eligibility regardless.

Mark Blankenbaker of CardsandCats.com has a lengthy piece detailing all the reasons why the Big East football conference is still worthy of respect.

Since the realignment (starting with the 2005 season) here are the bowl records of the 6 BCS conferences:

Post season records can be skewed in an individual season. Some conferences can have banner years followed by dismal bowl seasons, but over the course of a 6 year window, like the sample taken here it becomes hard to hide. I’m going to discuss how this relates to ‘scheduling around the myth’ later, but bowl games are the one time of the year when games are set up for two teams who have achieved at least some measure of success.

Seth Davis should probably get better at research.

Quick Google search, my man. That's all it would have taken to show, 1) UK plays in Freedom Hall every year; and 2) They never fill it.

Rick Bozich wonders aloud whether Connecticut can pull the upset on Saturday and send the Cards to the Orange Bowl .

ESPN's Andrea Adelson reveals her Big East awards picks, and the Cards nab half of the honors.

Freshman of the Year: Teddy Bridgewater, QB, Louisville. One of the big questions surrounding Bridgewater was whether he would be able to live up to the hype he had coming in as a four-star recruit out of Miami. After watching him lead the Cardinals to a come-from-behind win over Kentucky, most everyone could see he would develop into something special. Bridgewater took over the starting role after that game and has been solid all season. He broke the school record for passing yards by a freshman with 1,855 yards, and finished the year with 12 touchdowns to nine interceptions. Runner-up: Lyle McCombs, RB, UConn.

Coach of the Year: Charlie Strong, Louisville, OR Butch Jones, Cincinnati. This is a close one for me between Strong and Jones. Both have engineered remarkable turnaround seasons for their teams. Cincinnati went 4-8 last season and is one the verge of winning a share of the Big East title. Louisville started the season 2-4 and finished up on a 5-1 run that got the Cardinals at least a share of the Big East title. I have to wait for my final vote on this one until the games play out Saturday. Both are deserving of the award.

If you're a Cards fan in the ATL, a few folks wanted me to pass along the fact that there will be a game watch party for the U of L/UK game on New Year's Eve. 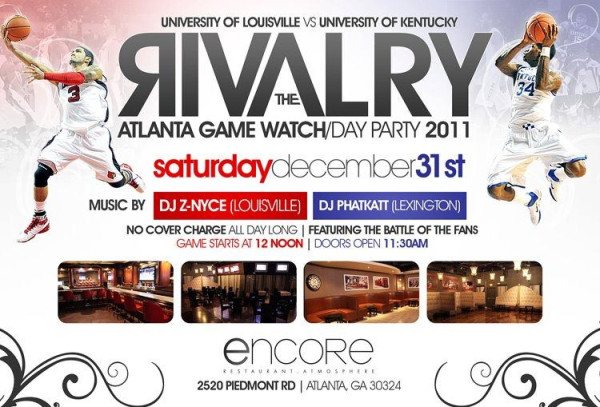 I really think somebody should start a business where they make these fancy club event flyers for standard hangout sessions.

"If You Don't Have A Ticket To The Game: COME WATCH WITH ME AND SARAH AT THE B-DUBS OFF SHELBYVILLE...No Cover Charge All Night Long For The Ladies OR The Fellas"

You toss in some fancy graphic design work and a selection of questionable pictures of friends, and things get really fun.

Seriously, I would do this if I possessed the power. If you do, I highly suggest putting those skills to proper use. Take the couple of hours you would have spent cleaning and do this instead. No one's noticing the dust on your TV stand anyway. They will, however, appreciate the sparkling effect you added to the picture of your 22-inch plasma on the ballin' "IF YOU'RE BORED FEEL FREE TO COME OVER AND WATCH MODERN FAMILY" flyer.

Regardless, the kid is really, really good, and he's committed to Louisville.

And finally, CollegeHoops.net is out with an updated list of its top 100 players in the country. It's an interesting(?) list that features just one Cardinal, Peyton Siva at No. 77.