An Open Letter To The Connecticut Huskies

Share All sharing options for: An Open Letter To The Connecticut Huskies

I know this is probably the last thing you expected to see this morning (or afternoon, or whenever your mail carrier decides to grace you with their presence lol), and my hope is that you've at least read this far. If you haven't, well, it's still going to feel good to get this out there.

The truth is (and I suppose this is the real reason I'm writing), I've never really been sure how you've felt about me. Everyone knows we've had our issues - Unfair catch, 2011 Big East title game, 26-0 in football last year...wow, it looks pretty bad when you lay it all out like that lol - but I think we both know that those things don't truly define our relationship, even if we're the only ones who know that.

Remember 2005? We were coming off a Final Four and you guys were the favorites to win the national title. Together we were going to set the college basketball world on fire.

I know we didn't hold up our end of the deal...I know that. When you're young and all you've ever known is Conference USA...well, I know that's an excuse you don't want to hear so I'm not going to make it again. Anyway, I like to think that everything we've done since has made up for that. I like to think you think that, too.

I don't know if you know this (you probably do), but I was watching last March. I was watching the whole time. I know what you did for me and, even if we never talk about it face-to-face (which is fine), I want you to know now that I will forever be grateful. If you hadn't done what you did at the time that you did it, well, that's something I don't even let myself think about.

I thought about calling, or at least sending a card, a thousand times. In the end I guess I just sort of assumed that this was the way you wanted it. But just so you can't ever tell anyone that I don't secretly feel the same way... 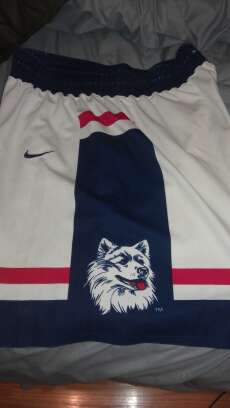 Admittedly, I don't wear these as often as I used to, but I do wear them. I'm wearing them now, in fact.

All right, enough with the sappy lesson in history and on to the main point.

Recent events have left a scar that no one outside of you and I (and maybe Rutgers) will ever be able to truly understand. Again, this is something we don't have to ever actually discuss, but something I bring up (albeit hesitantly) for a reason.

We have an opportunity to make this whole thing at least a little bit better, an opportunity to take a bag full of the anger and frustration of the past few months and leave them in the sand on South Beach. Thing is, that can't happen without your help. That's not a prediction, that's a fact. You don't help, we spend New Year's at home, and in all likelihood the drunken cowboys of the wild, wild Appalachian Mountains get to take our place.

If we could bring you, we would. That's not BS. We've never had to fake it, you and I. Know that.

At the same time, you know what it means, you know how it feels (I'm sure that Houston trip wasn't too bad either...wink wink...nudge nudge); you were there last year. Granted, circumstances have changed, but still, you were there.

I don't know what any of this means, if you care or if you've even read this far, I just hope that come Saturday you do what's in your heart.

Do what's in your heart.