Share All sharing options for: Louisville cheer and dance teams will be making the trip to Morgantown

This via West Virginia senior Mackenzie Mays, who spoke with U of L SID Kenny Klein earlier today. 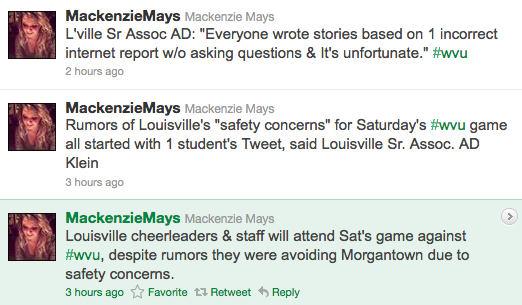 You can't make these types of mistakes if you want to make it big, Mackenzie. Check your AP Stylebook. The "quote-in-quote punctuation for use in reference to local online sports web sites" entry should be on page three. At least that's where it was when I was in school. Crazy times.

It does seem a bit odd that the SID office is acting like there was never any plan to keep the cheer and dance teams home when it reportedly confirmed that very piece of news less than 24 hours ago.

A school keeping its cheer and dance teams from traveling to a game because of concerns about the environment is a pretty serious condemnation. We decided to call Louisville to see if the story was true.

While the school’s sports information department confirmed that neither squad will make the trip to West Virginia, they said safety concerns were not the reason.

LBS was told that it’s not unusual for the cheer and dance teams to miss an away game. We were told that they could miss a game because of other events (e.g. scheduling conflicts), financial issues, travel restrictions (if it’s difficult to get to the game), academic limitations, squad size restrictions, or because of the crowd size of Louisville fans at an opposing game.

While those are all legitimate reasons for the squads being unable to make a trip, Louisville was unable to explain why the teams would not be traveling to Morgantown this weekend. They also said that the rumor that administrators would not be making the trip was false.

We understand there are many reasons the cheer and dance teams are not making the trip this weekend. Even if they won’t admit it, safety concerns seem legitimate. It’s also curious that they weren’t able to explain why.

I'll never understand the lack of straightforwardness, but whatever, it keeps things interesting.

To be honest, I liked it a whole lot more when the cheer and dance teams weren't going. We basically got three full days of West Virginia fans both defending themselves and proving the rest of the country's point at the same time. It also definitely helped build excitement for the game on both sides, which is impressive considering how combative the situation already was between the two heading into the week.

Beat West Virginia. That is all.