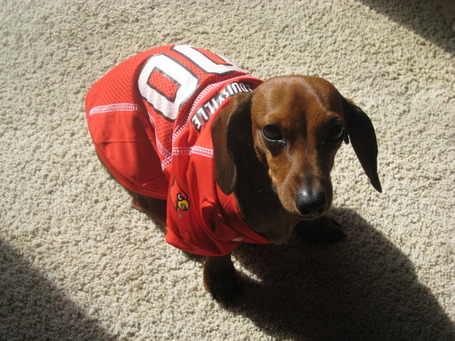 Reece "Gaines" Johnson is geared up for the evening. According to his owner, "it's his belief that double zero makes a larger impact than double deuces. While we don't agree on this point, we both agree that he deserves a chance to headline Card Chronicle."

That's a game face right there. Reece wishes a Mountaineer fan would throw a battery at him.

We never got around to discussing the Syracuse game, but here's a tidbit that needs to be shared (not J-Bone's pink glasses).

Near the end of the third quarter a bee flew straight into my quarter-full beer. I sat in stunned silence as I watched the bee struggle for a moment before somehow finding the strength to fly out. Not sure what to do next, my friend suggested that I finish the beer. I did.

Am I saying that this sequence of events somehow provided the entire Louisville football program with added B(Beeee)CS strength? Yes. That's exactly what I'm saying.

We both did it for you guys, the bee and I.

Also, J-Bone wore pink glasses and actually made his first appearance of the afternoon after a Cardinal touchdown. A significant day any way you look at it.

A message from the ticket office to U of L students who have purchased season basketball tickets:

You have until 4 p.m. to pick up your basketball tickets for the first half of the season at the ticket office, or you can pick them up at the KFC Yum! Center from 5:30 p.m. until halftime of tonight's game vs. Bellarmine. If you don't pick them up, then your tickets will be reallocated and you will be given a refund for the full price of basketball season tickets.

I'm still getting zero cell phone reception at both PJCS and the Yum Center. Apparently being the driving force behind the distributed antenna system installation doesn't carry as much weight as you'd think.

Complaints over cell ser­vice in the arena started as soon as it opened in mid-October.

Mike Rutherford, who op­erates the Card Chron­icle blog devoted to Uni­versity of Louisville sports, said he's been frus­trated by delays in receiving text messages and a slow Inter­net connection dur­ing U of L bas­ketball games.

"Last year at Freedom Hall it was a lot eas­i­er," Rutherford said. "But this year when I have gotten out to the games it's been a lot more diffi­cult."

I guess "the quote heard 'round the Commonwealth" didn't have quite as large an impact as the experts predicted. 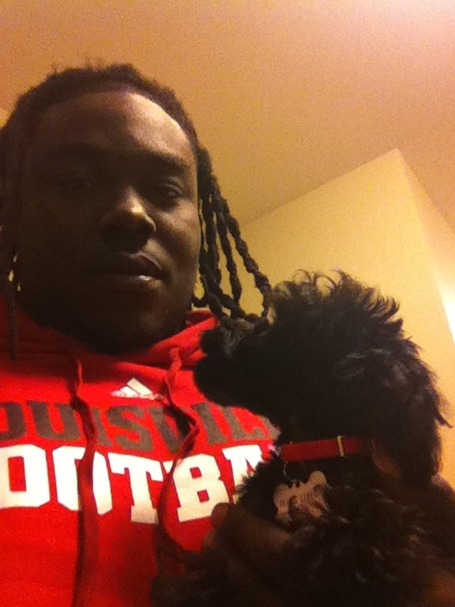 Number of things wrong with that picture: zero.

SI is out with its Louisville basketball preview and lists Gorgui Dieng's ability to step into a starring role as the key to U of L's season.

This is a team that has the parts to be a force in the Big East and beyond. Eight players have started 10 games or more throughout their careers, and Blackshear and Behanan arrive as top-50 recruits with the confidence to contribute immediately. Kuric and Smith are dangerous three-point shooters, while Siva understands how to run a team and can attack the basket.

But there are two questions this team must answer: Is Dieng ready to play 25-30 solid minutes per night in the Big East? And are there enough NBA-quality players, to get to the Final Four?

Andrea Adelson is picking against Louisville again, which might not be such a bad thing.

Louisville got me again. Two weeks in a row I pick the Cardinals to lose, and two weeks in a row they win. That was my only loss of the short week as I went 2-1. Through nine weeks, I am 37-14 and hoping to do better with a full slate for Week 10.

Louisville at No. 24 West Virginia, noon, Big East Network. This is your classic battle of offense versus defense. So which side will prevail? The Cardinals have played well in their two straight wins over Rutgers and Syracuse. The run game has worked; the defense has not given up the big play and forced turnovers, too. The good news for Louisville is that West Virginia has had problems stopping the run and has not generated much of a pass rush this season. The bad news -- the Cardinals have lost four straight to the Mountaineers and are going to be faced with a serious challenge in stopping the West Virginia passing game. Louisville likes to bring the blitz, but if it is picked up well in this game, then the Cardinals run the risk of leaving playmakers like Tavon Austin and Stedman Bailey running loose. Remember earlier in the year T.Y. Hilton burned this defense for more than 200 yards passing. Louisville is much better today than it was in Week 2. But the big play can be had on this unit. West Virginia does just enough to win. West Virginia 27, Louisville 20.

Here's the pregame story on tonight's tilt from the Bellarmine point of view.

The Louisville women's soccer team knocked off Providence 2-0 in the first round of the Big East Tournament earlier this week. The Cards will face Notre Dame in the tourney semifinals at 3 p.m. on Saturday in Morgantown. The game will be televised on the CBS Sports Network.

The men's soccer team will kick off its Big East Tournament run against Providence tonight at 7 p.m. at Cardinal Park. The winner will travel to face Marquette on Sunday at 2 p.m.

The Daily Mail in West Virginia says Teddy Bridgewater is not your average freshman.

Bridgewater is on his way. He's made five starts and has led Louisville to back-to-back Big East wins for the first time since 2006. Louisville (4-4, 2-1 Big East) plays No. 25 WVU (6-2, 2-1) at noon Saturday. The Big East Network will televise the game from Mountaineer Field.

"You'll see," WVU defensive coordinator Jeff Casteel said. "He's a talented guy. You can tell he handles himself really well. He doesn't panic with people around him. He doesn't panic in the pocket. He has the ability to escape the rush. He looks downfield when he wants to run it. He can make plays when he runs it and he looks to throw the football when he's running."

The kid just gets it.

And finally, I'm linking this solely because of its brilliant title.