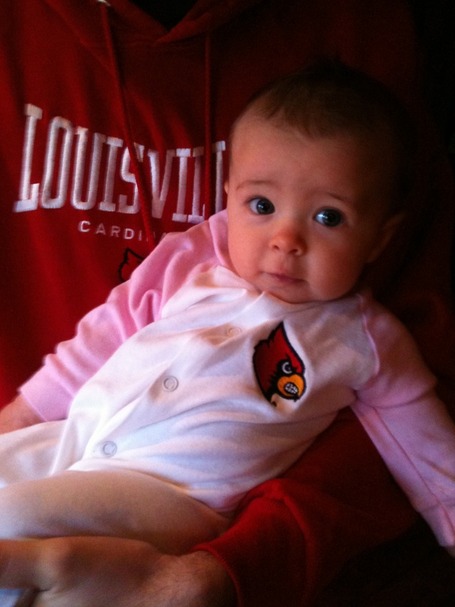 Lillian Potts repping the Cards in Madison, Wisc. Those big eyes totally give away the fact that she knows she's posing for a team-specific college sports web site that once openly feuded with Dick Vitale.

You're welcome, Lillian. We made you hot.

Seriously though, what a doll.

A very interesting story from the Big East Coast Bias (via Cats lllustrated) about Central High running back Ace Wales stating that U of L coach Kenny Carter has told him he believes Louisville will end up in the Big 12.

"My main question for them was, what conference are they going to be in?" he said. "And also if (Charlie) Strong and them would take a (job with a) bigger team in the next four years, whether I will be able to count on them to be there the next four years. I felt they have always kept it real with me and looked me in my eyes and told me the truth.

What was Carter's response for which league he thought the Cardinals would land in? "He said they would be in the Big 12, no doubt," Wales said.

I honestly don't think this is as simple as a coach feeding a kid a line, as Carter's expressed sentiment is one shared by many around the U of L athletic office. Not only that, but many members of the Big 12 media still talk like Louisville to the conference in 2013 is all but a done deal.

Still, even if this depiction of the situation as it stands is accurate, history tells us that it is by no means an indication of how things may be a year from now. At this second, the Big 12 might have every intention of extending an invitation to Louisville in the relatively near future, but who knows if that will be the case in six, nine or 12 months (or days).

Five-star class of 2013 combo guard Solomon Poole (brother of former UK player Stacey) has narrowed his final list to Louisville, Memphis, UCLA, Georgia and Oklahoma State. His brother having issues at Kentucky may end up being the best thing that could have happened to Louisville in this recruitment.

The two AP voters who listed Louisville this week were Brett McMurphy of CBS (24th) and Ron Higgins of the Memphis Commercial-Appeal (25th). Clearly these two men are on the train.

I don't even know what the actual commercial is, but every time I hear the opening notes from "The Dance of the Sugar Plumb Fairy" on TV and look up to see that it's not the M&M's commercial where they meet Santa, I rage. If at some point between now and Dec. 25 I hear "O Christmas Tree" being whistled from the television and look up to see a car commercial instead of a single island palm tree being lit up with Christmas lights, I'm gonna f---ing explode.

Lost in the hype surrounding Louisville's Friday game against Vanderbilt and Kentucky's Saturday game against North Carolina is the fact that the women's teams are playing their annual rivalry game on Sunday. For the first time in series history, both will enter the game highly-ranked. The Cards are No. 10 in the latest AP poll while the Cats are No. 12.

The game, which will be played at Memorial Coliseum in Lexington, is already sold out.

Yet another monster weekend for Louisville sports. I realize we've been saying that for three weeks now, but even with the football team's regular season finished, this has to be the biggest one of them all.

A message from U of L regarding Saturday's Elite Eight soccer match:

This past Sunday, the Nationally-ranked Louisville Men's Soccer team defeated #5 Maryland 4-2 to advance to the NCAA Elite 8. Much like the game a year ago, the Cards will be taking on the UCLA Bruins to advance to the College Cup for the 2nd year in a row!

Let's recreate the 7,000+ atmosphere like last year and PACK THE PARK this Saturday, December 3rd at 7pm at Cardinal Park!

The athletic department will be bringing in 2000 additional seats to accommodate fans. So make sure you come out and show your support!

Ticket prices below: Order yours today by calling 852-5151

THE FIRST 500 U of L Students will receive FREE tickets courtesy of the University of Louisville! Pick yours up starting today at the SAC ticket office on the 3rd floor of the SAC!

The athletic department has also added a special bleacher section for all students located behind the South Goal.

Come out, paint up and cheer the Cards on their quest BACK to the College Cup!

Louisville's Friday night victory over Rutgers back in October had to have been the season's turning point.

At the time, Strong was wondering how his team would win another game -- not reach a BCS bowl. He called his seniors in for a meeting that Thursday, the night before they were set to play Rutgers.

"I told them ... I want some players to stand up and I want the players to tell me what's wrong with this football team. Anthony Conner was the first player to stand up. That's the game he got injured in. Players remembered what he said ... it was just the leadership our seniors developed. They took the young players in because they knew they wouldn't be able to win without them."

Conner, a senior cornerback, ended up breaking his neck following a scary collision with Mohamed Sanu. He lay on the ground for several minutes before he was carted off the field. Nobody knew whether he would be OK, but the players resolved to win the game for Conner.

They did. Louisville closed the season 5-1, and Conner has been a player this team has rallied around. Conner underwent surgery to stabilize his spine shortly after he got hurt, and a full recovery is expected. He has been on the sideline wearing a neck brace, helping coach up his teammates.

And finally, we haven't mentioned it outside of the comments section yet, but congrats to Teddy Bridgewater on breaking the U of L freshman passing record during the Connecticut game. Teddy's total of 1,855 yards surpasses Chris Redman's 1,773 yard-mark from 1996.