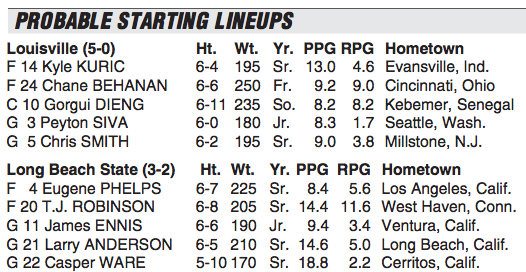 Known before the season for playing the toughest non-conference schedule in the country, Long Beach State caught the country's collective eye with its 86-76 win at then-No. 9 Pittsburgh on Nov. 16. It was the 49ers first win over a ranked team since 1994. In addition to Pitt and Louisville, LBSU faces three other ranked non-conference opponents this season in No. 1 North Carolina (Dec. 10), No. 12 Xavier (Dec. 22), and No. 14 Kansas (Dec. 6).

Four seniors and a junior are among the five returning starters from a LBSU team that posted a 22-12 record last season and won the Big West regular season. Reigning Big West Player of the Year Casper Ware is one of the best guards in the country, at any level. The senior leads the 49ers in scoring at 18.8 ppg and assists at 4.0 apg. He rarely makes poor decisions with the ball in his hands, which is a huge asset for The Beach against Louisville's pressure.

Senior forward T.J. Robinson in Long Beach State's all-time leading rebounder (919 career rebounds) and is eighth in career scoring. He's currently averaging a double-double at 14.4 points and 11.6 rebounds. Senior two guard Larry Anderson is the team's second-leading scorer (14.6 ppg) and a capable three-point shooter. He's been a double figure scorer in each of his four seasons at LBSU.

Despite starting four seniors, head coach Dan Monson has blamed both of his team's losses on a lack a lack of maturity and understanding of what it takes to win on the road. In each instance, the 49ers squandered a double-digit lead and made crucial mistakes down the stretch. Part of The Beach's late-game struggled might also have to do with all the traveling the team has done already. The 49ers played at Montana on Saturday and will tip-off inside the Yum Center tonight just a little over 48 hours after that game ended.

Don't be surprised if Louisville falls behind by a fairly healthy margin early on and then has to string together a second-half rally. These guys have already shown they're fully capable of getting up for the big game.

Louisville will not win this game tonight without a better offensive performance than they've given over the past three contests. LBSU is the most talented team the Cards have faced this season, and they're even more capable of springing the upset tonight than Ohio was on Friday. Don't be surprised if U of L trails for more minutes than they lead tonight.