For the second time this season, Louisville quarterback Teddy Bridgewater has been named the National Freshman of the Week by Rivals.com.

Louisville still needs help to reach its first BCS game since 2006, but the Cardinals took care of their end of the deal with a 34-24 win Friday over USF in Tampa.

The Cardinals' transformation from a team that lost to Florida International and Marshall early in the season to a team with a share of the Big East title has been because of a handful of factors, but the most visible is the play of Bridgewater.

He was 19-of-28 with 241 yards and a career-high three touchdowns in the comeback win over the Bulls. Louisville trailed 24-20 with 2:21 remaining in the third quarter before Bridgewater's 11-yard touchdown pass to a wide-open DeVante Parker in the end zone against a confused USF secondary.

The performance likely wrapped up Big East Rookie of the Year honors for Bridgewater as well. 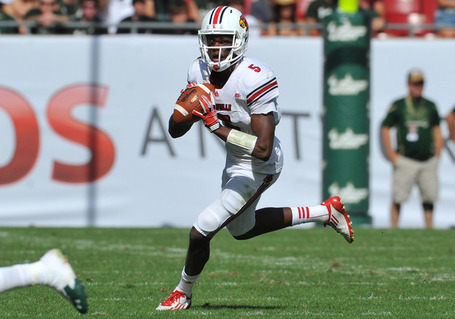 My expert stance on this matter is that the young man has a future.