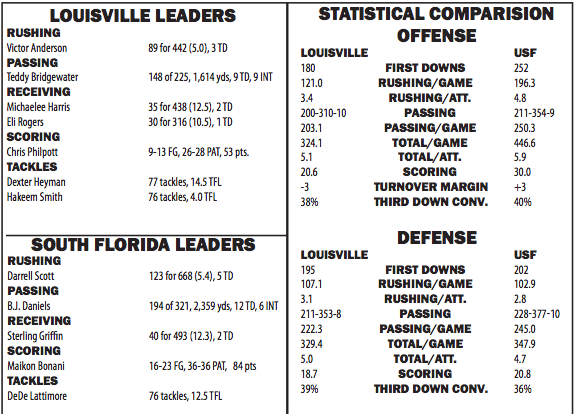 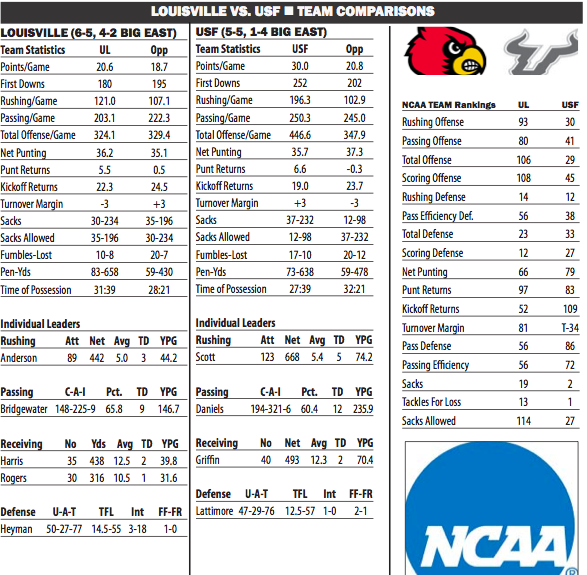 Forget all the BCS implications, the second-youngest team in all of college football is one win away from being able to call themselves champions of the Big East. Without question, this would be one of the more remarkable accomplishments in the history of Louisville athletics. This is a big, big day.

Last game of the season, can't hold anything back...Shut up, Brent.

Pregame Meal: Tailgate crew is slightly disorganized due to the holiday, which means no organized food effort...which means McDonald's breakfast again. A bacon, egg and cheese bagel with a coffee might be my last meal if I'm ever falsely accused of murder and hire Daniel Mudd as my defense attorney.

Bushell was about a half inch away from getting another one last week. I feel it...in my left ear.

I've been fighting this one all season. The time time to let go is upon us.

--A Louisville victory would lock up at least a share of the 2011 Big East conference championship.

--USF junior QB B.J. Daniels is questionable for the game because of a sprained right shoulder.

--Sophomore QB Bobby Eveld will start if B.J. Daniels is not available. He started last year's regular-season finale against Connecticut when Daniels was hurt the previous week against Miami.

--Louisville’s is 0-4 all-time at Raymond James Stadium and the average margin of victory is 21.0 ppg.

--South Florida is 3-1 against Louisville in games played in November.

--USF’s offense has posted 16 TD drives of less than two minutes over the last seven games including seven that were less than a minute. Of those 16 drives, seven have been drives of three plays or less.

--Through 10 games, USF has posted eight plays over 40 yards - five over 50 yards - with six of the seven resulting in TDs. In addition, the Bulls have only given up one play over 40 yards.

--The Cardinals are 3-2 on the road this season, and the two games they lost was a nine-point decision at Cincinnati and a seven-point loss at North Carolina. The Cardinals have played well away from home, allowing 22.2 points per game and just 99.6 yards on the ground. Louisville is yielding 349.2 yards of total of- fense in its first five road games.

--True freshman Matt Floyd currently is the No. 3 quarterback on the USF depth chart but he has done nothing but run the scout team this fall.

--USF sophomore DT Luke Sager is a question mark because of a concussion. He is a backup for senior Keith McCaskill and has played in all 10 games, recording eight tackles with one sack.

--USF senior LB Curtis Weatherspoon, a backup, is out with a knee injury. He has played in seven games and has 10 tackles.

--Louisville has outscored opponents 41-10 in the first quarter of road games this season.

--Louisville has been extremely successful in the red zone on the road, scoring 11 times in 13 possessions, including eight touchdowns. The Cardinals have enjoyed a +6:40 minute advantage in time of possession in five road games.

--The Cardinals are 1-5 this season when scoring under 20 points in a game and are 1-8 under head coach Charlie Strong when not reaching the 20-point plateau.

--"We’ve got our opportunity; we want to go win. We’ll worry about the bowl arrangements after the game." --Charlie Strong

--"I know our players are frustrated with the close losses that we've had, but if anything, I think they are more determined than ever. I certainly don't think anything has happened to damper their spirits or put out their fire or caused them to throw in the towel, throw up their arms." --USF head coach Skip Holtz

--"It’ll be great for the organization to go down there and be the first team to beat South Florida. It’ll also be great for the seniors to say they were part of a legacy, to say that they were the ones that started the foundation." --Dominique Brown

--"If you look at some of our worst defeats, I think the average score there for us we've lost by 21 points or more. It hasn't been a good venue for us to go play. ... Our players need to understand that." --Charlie Strong

"There's a ton of urgency. That's our No. 1 goal right now, to get to that bowl game. We absolutely don't want to be doing nothing in December, so that's what we're looking for right now. Nobody's giving up, nobody's laying down, and we're going to work hard every day for that." --USF center Chaz Hine

--(On why Louisville hasn't been able to win in Tampa) "I don’t know...I’m trying to answer your question, really." --Mario Benavides

--"There's no pressure at all. We have our minds set on one thing and that's just winning the game. All the outside influence and all those things, we don't let it get to us.'' --Teddy Bridgewater

"The attitude is extremely positive right now, extremely close together, and I think the wagons keep tightening and we just have to keep working as a football staff and a football program. I think right now the key word is persistence, as close as we are. We just have to stay the course and keep going." --Holtz

--"We just have to go down there locked in and play our football. So far when we’ve played our way, the way we can play, no one has been able to stop us." --Michaelee Harris

--"Basically, B.J. is faster and the other one (Eveld) ain’t. We don’t know if he’s playing, so we have to prepare for anything." --Brandon Dunn

--"Bobby (Eveld), he can run the show. He proved it last year when he helped us beat Miami. We have a lot of confidence in him and we're here to support him with everything we do." --USF running back Darrell Scott

--(On last year's overtime loss to USF) "I’ve never forgot about it, to be honest with you. That is probably the most upsetting loss I’ve ever had since I’ve been here. It took a while for me to get over it really." --Mario Benavides

--"A year ago or at the beginning of the season, who would have predicted this team to be where we are right now?"--Teddy Bridgewater