Whatever, dude. History is history, and I was there for every second.

Is it a night I'm going to be telling my children about?...Yeah, probably. I talk a lot.

I understand that Louisville played great defense and that John Brady is a tempo coach still adjusting to life without his star player...but sweet Jesus. You can't blame tempo or Martavius Adams' off-the-court issues for blown lay-ups or going 6-of-18 from the free-throw line.

The defensive performance thankfully drew attention away from a fairly dismal Cardinal effort on the other end of the floor. Louisville shot just 37.3% and turned the ball over 14 times despite the Red Wolves applying a relatively small amount of defensive pressure. It seemed like every time U of L started to get into a flow offensively, Pitino decided to shake-up the lineup.

Louisville has now held four straight opponents to less than 55 points for the first time since December 1946. I'll be extremely surprised if that streak is extended on Friday against Ohio. The Bobcats have a plethora of offensive talent and will provide more of a test to a Siva-less Cardinal squad than Butler did.

The Cards had 13 assists and Chris Smith had seven of those. He also had zero turnovers. The only downside to his game on Tuesday was the fact that he attempted just two shots. We're not going to be able to beat good teams this season without CS5 producing offensively.

I don't know if it's just because I'm getting older (read: creepier), but it seems like the Ladybirds are even more (how do I put this?)...yes...than usual this season.

This was the second straight game where I thought Elisha Justice played really well. He's trying to do push the issue more when the ball is in his hands, which is a positive development.

Russ Smith simply isn't going to be able to do what he's been doing once we get into Big East play, which makes Justice's progression vital. If he can make a handful of plays to go along with effectively managing the offense then he will become a huge asset once the deep winter months are upon us.

My feelings of ill-will towards Air Louie are growing by the game. We're one accidental bump of Mark Jackson Jr. away from an all-out Internet campaign to get someone to pop that Zooperstar-wannabe suit. 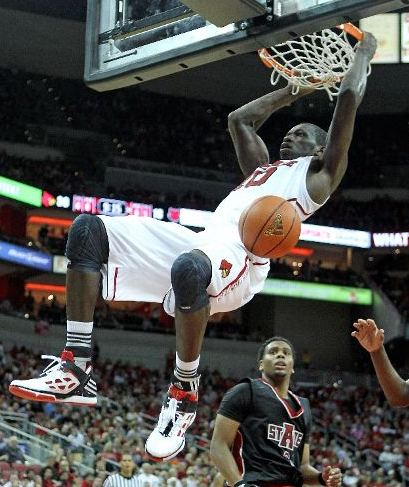 I'm not sure who gave Chane Behanan the green light from behind the three-point line, but that light needs to skip yellow and jump straight to red. Even in the Bahamas when there was no one guarding him his stroke did not appear promising.

Pitino spoke after the game about Behanan not progressing the way he was hoping because he's not absorbing scouting reports and making the same mistakes the coaches have been working with him on during practice. It will be interesting to see how the (hopeful) return of Rakeem Buckles will aid his progression going forward.

The Swop magic wore off a bit on the offensive end, but he was still our most aggressive defensive rebounder. He finished the evening with seven boards in 18 minutes. Oh yeah, definitely.

Loved the matching track suit effort from Rock and Wayne on the bench. Mike let me down a little bit, but only because I had become so accustomed to his button up and dress slacks-style (see Marquette regular season highlight video...also see the same right-handed fist pump on every Preston three).

Luke Hancock: we're not where we need to be, but we're making progress. This is like Terrence Jennings' freshman season at the free-throw line. Kid's going to be in a full tux come Madison Square Garden time.

Chris-to-Chane alley-oop tickled my fancy. That's one of my new things, I say "tickled my fancy." I'm also debating starting to wear something on my wrist. I'm not totally sold on the idea. Tickled my fancy, though, that one...that one is a winner.

The Cards have now faced three really deliberate offenses and shown that they can communicate and switch surprisingly well for it being this early in the season. Granted, these were not three especially talented deliberate offenses, but that doesn't change the fact that this squad appears to be ahead of previous Pitino squads in that regard. Like I said earlier though, the Ohio game will provide more insight into just how good this Louisville team is - at least defensively - than any other so far.

So this huge Thanksgiving week for Louisville sports is now off to a slow, sluggish but great start. Very holiday-appropriate, gents.