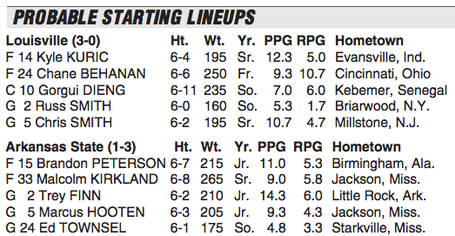 Arkansas State returns two starters from its 17-15 team from a year ago which won a share of the West Division of the Sun Belt Conference: junior guard Trey Finn, a preseason All-Sun Belt third team selection; and junior forward Brandon Peterson. Peterson, who is fourth in ASU history in career blocked shots with 97, led ASU on Sunday in its loss to Ohio with 19 points and seven rebounds while Finn added 17 points in the game.

Finn, who leads the team with 14.3 points per game, has been tremendous from 3-point range, making 9 of 16 attempts (56.3 percent) over his last three games. He could struggle to get going from beyond the arc versus a stifling Cardinals defense holding opponents to just 23.6 percent from long distance.

ASU should have returned a third starter, Sun Belt preseason Player of the Year candidate Martavius Adams, but he was dismissed from the team on Nov. 1. The loss of Adams, a highly-talented 6-8 forward, has been the blame for much of Arkansas State's early-season struggles.

The Red Wolves have been plagued by sloppy play all season, averaging 18.8 turnovers. They committed 22 in a 13-point loss to Ohio on Sunday - their highest total in nearly five years.

ASU was one of 17 teams in the nation that was undefeated at home last year (13- 0). With head coach John Brady - yes, THAT John Brady - and assistant coach Richard Williams, Arkansas State is the only team in the nation with two coaches on its staff who have led teams to the Final Four. Brady led LSU to the 2006 Final Four, while Williams led Mississippi State to the 1996 Final Four.

Only time will tell, indeed.

Even without Siva, if this game is in doubt after 30 minutes then it will have been an extremely poor effort by the home team. Too much size and too much talent for the good guys.