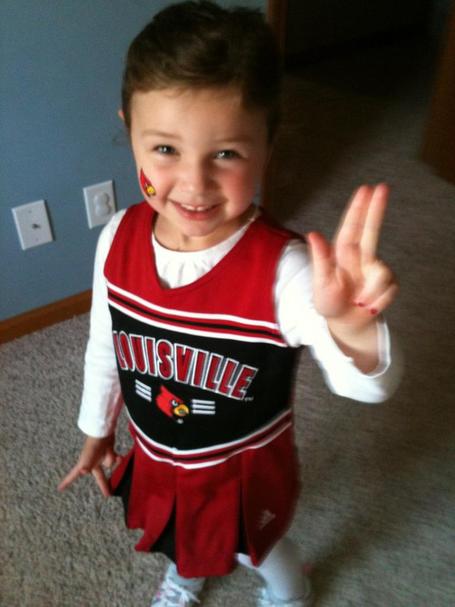 I just wanted to type that once. I promise I'll never do it again. It's out of my system, I swear. I just...I just didn't want to wake up one day as an 80-year-old who always regretted never typing that line when he had the chance. Thanks for sticking with me through this.

Louisville has opened as a three-point underdog at South Florida.

I'm going to go ahead and say it: I did not enjoy the dual Cardinal football/basketball viewing on Saturday.

People often give me guff (read: shit) about referring to the Louisville football/basketball team as "we" or "us." I don't know how many times I have to tell these people that I reserve that right because my focus/attire/rituals have an actual effect on the game. Do you know what happens when that focus is disturbed? EVERYTHING IS COMPROMISED. And that's exactly what happened on Saturday.

Where do I put the computer? Which game do I leave the volume on? WHAT THE F--K DO I HAVE TO DO TO GET A BETTER PICTURE ON THIS THING? Let's toss it over to the Party Deck and J-Bone.

I'm a big enough man to admit when I'm rattled (and that I enjoyed Titans during its brief run), and I was rattled on Saturday. I'd rather not trudge through the experience again.

Louisville jumped one spot in the AP poll (thanks to Florida's loss to Ohio State), and now sits at No. 7 in both major polls.

In case you missed it, Rentschler got Chron'd on Saturday: 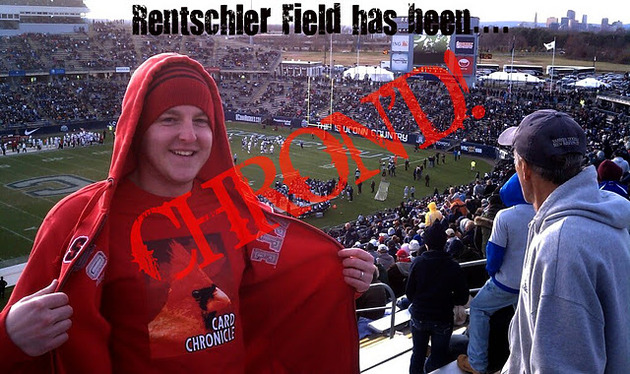 You people are doing God's work.

Despite being picked 7th and 8th before the start of the season, Louisville and Rutgers have both overcome the odds and have a chance to clinch a share of the Big East title this weekend.

Louisville was supposed to be too young.

Rutgers was supposed to be overmatched in the trenches.

That is the most basic explanation for why the Cardinals were picked to finish No. 7 and Rutgers No. 8 in the Big East preseason poll back in August. Yet here they are, headed into the final two weeks of the regular season, and each has a chance to clinch a share of the conference title, and even a spot in the BCS.

If Rutgers wins at UConn and Louisville wins at USF, both finish atop the league standings with a 5-2 record. Of course, several other teams have a shot to finish 5-2 as well. To help their chances of getting into a BCS game, Rutgers needs Louisville and West Virginia to lose; Louisville needs Cincinnati and Pitt to lose.

As for Louisville, the Cardinals were on the brink of collapse after a 2-4 start, including losses to FIU and Marshall. The Cardinals couldn't run; they couldn't block on the offensive line; and their defense was giving up way too many big plays. Coaching one of the youngest teams in the country, Strong could have very easily lost his team.

Instead, the Cardinals have won four of their last five games, with wins over Rutgers and West Virginia. How have they done it? For one, their young team is growing up. Louisville has started 11 true freshmen this season -- including quarterback Teddy Bridgewater. There are 28 freshmen and sophomores on the two-deep, and just six senior starters.

For another, they have figured out how to run the football effectively, and also have done a nice job switching player positions to great effect. Dominique Brown moved from quarterback to running back. Lorenzo Mauldin switched from tight end to defensive end and started last week against UConn. Josh Bellamy has played cornerback this year as well. Changing coordinators from Mike Sanford to Shawn Watson midseason also has helped the offense improve.

Louisville (6-5) is averaging 28.5 points in its last four contests, compared to 16.3 in its first seven. Now the Cardinals have four wins in Big East play for the first time since 2006.

"We have sputtered along the way," Strong said Monday. "I don't know how good we are. I know we need to get better, but our coaching staff has done a tremendous job each week of getting these players ready. To see our guys go out and fight ... it just speaks volumes for how hard they want to win."

Tim Johnstone is the Louisville representative in this year's Biggest Fan in the Big East contest. Do him a favor and go vote for him by clicking right here.

ESPN's Andrea Adelson slots the Cards at No. 5 in her latest Big East power rankings.

5. Louisville (6-5, 4-2). The Cardinals are very much in the hunt for a Big East title, so you have to give coach Charlie Strong and his players credit for that. But you can't erase losses to Florida International and Marshall.

Through two weeks of play, Bryce Cotton is the third-leading scorer in the Big East at 22.0 points per game. Basically, Austin Montgomery is a recruiting savant. 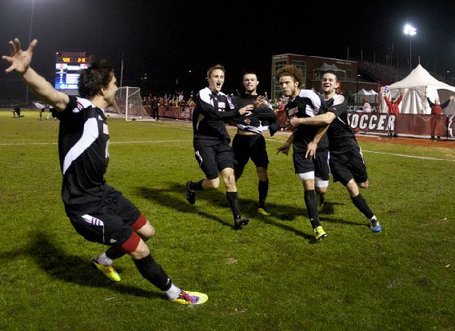 Even if you can't get into the sport otherwise, Cardinal soccer in November has proven itself to be incredibly exciting. Can't wait for Sunday.

If you didn't see it on Saturday, this was Brad Stevens' quote regarding Louisville after the game at Hinkle:

"They're already very good, but with Siva in the lineup they're not just a March team," Stevens said. "They're an April team."

No two players epitomize the Louisville/Kentucky rivalry quite like Russ Smith and Kyle Wiltjer. 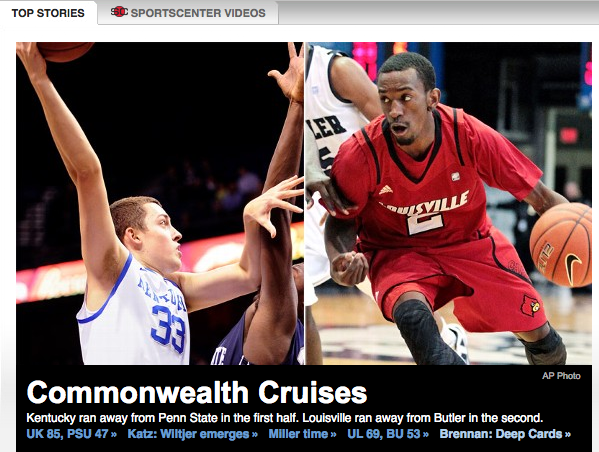 In case you didn't read it in the Pitino presser post, Peyton Siva will not play in Tuesday night's game against Arkansas State. Pitino is hopeful that he will be able to practice on Thanksgiving and then play Friday night against Ohio. Pitino was also hopeful that Rakeem Buckles will be able to return to practice on Thursday, but added that it will probably be at least two weeks after whenever he returns to practice that Buckles will be ready to see floor time in an actual game.

Louisville is heading into its season finale looking to clinch at least a share of the Big East title. I swear to God this is happening.

Louisville is heading into its season finale with a legitimate shot at a BCS bowl. I swear to God this is happening.

I feel like Alf doesn't get referenced enough. The world needs about 95% more Alf references.

I'll be giving a very similar speech to whomever I'm with on Saturday if we beat South Florida.

The women's basketball team got a big win over Xavier on Sunday. Becky Burke led the way with 13 points.

And finally, be sure to check out Voodoo Five throughout the week for all your South Florida wants and needs.