A product of Louisville Central High School, Lyles became the first African American to play football for the Cardinal when he suited up in 1954. By the start of his senior year, Lyles had earned the reputation and the nickname of the "Fastest Man in Football." That year, Lyles became the first Louisville football player to rush for over 1,000 yards in a single season. His 1,207 yards not only earned him Little All-America acclaim but led all of college football in 1957.

Lyles left Louisville as the school's all-time leading rusher, and currently stands No. 3 behind Walter Peacock and Nathan Poole. His career marks of 42 touchdowns and 7.0 yards per carry are both still U of L records.

Following graduation, Lyles was selected in the first round of the '58 NFL Draft by the Baltimore Colts, where he teamed with fellow Cardinal Johnny Unitas. In his rookie season, Lyles - who had been moved to cornerback - played in the famous 1958 NFL Championship Game which ended in sudden-death with the Colts defeating the New York Giants, 23-17.

Lyles followed up a successful 12-year stint in the NFL with an equally successful career in business. He was a hero to many in the city for being one of the first Louisvillians to invest a substantial portion of his business earnings into the city's West End.

His legacy is honored today with a statue at Cardinal Park. 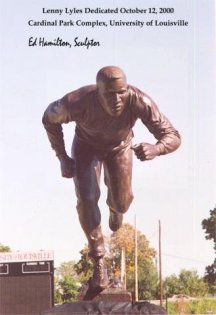 Our thoughts and prayers are with the Lyles family during this time.