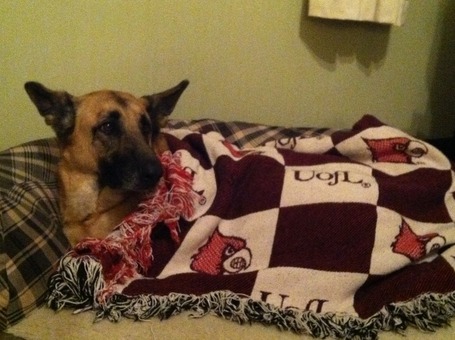 Belle the German Shepherd needs her rest before heading into a solid three-day stretch of Louisville sports.

Lots of talk today about Rick Pitino's practice philosophy and willingness to issue a premature prognosis, but lost in those debates is the biggest news of all from yesterday: Wayne Blackshear is likely going to play basketball for Louisville this season.

The Cards will be formidable without Blackshear, but there's definitely a chance that his return could be the difference between a second and third weekend in the dance. U of L's main issue offensively is a lack of players who are capable of creating their own shot. The player least affected by this weakness is a 5'11 point guard who would prefer to create shots for his teammates. Basically, Blackshear could be huge for this team once it gets into the heart of Big East play.

One of the best parts about the return of college basketball is Luke Winn's power rankings, which debuted yesterday. Winn has the Cards ranked seventh.

Best thing from Louisville's 74-55 win over Pikeville in its first exhibition game: Sophomore big man Gorgui Dieng, who the Cardinals are relying on heavily to anchor the post position, had 14 points, 15 rebounds and six blocks. He has the potential to be better for the Cards at the five than Terrence Jennings was last season. Worst thing: Louisville only went to the free-throw line 23 times while taking 68 field-goal attempts, for a FTA/FGA rate of 33.8. One game is a small sample, but it follows a trend that hurt Louisville's offense in 2010-11, when it ranked 324th nationally in FTA/FGA rate at 29.9. (That, combined with the fact that the Cardinals shot just 66.3 percent from the stripe, ranking 264th nationally, led to them being a middle-of-the-pack offensive team in the Big East.) As long as Louisville's defense remains stout, it doesn't have to become a scoring monster to contend for the league title -- but it would help if its players attacked the rim with the same level of aggressiveness that they display while pressuring opposing ballhandlers.

SBN's Bill Connelly is out with his latest bowl projections, and he's got the Cards staying home for the holidays.

On a related note, Rivals has Louisville headed to Brimingham to face Vanderbilt.

Peep the respect from SI's "Hot Clicks." Or just stare at Kate Upton. But for the love of God do at least one of the two.

The U of L women's team is ranked ninth in the ESPN/USA Today preseason top 25. 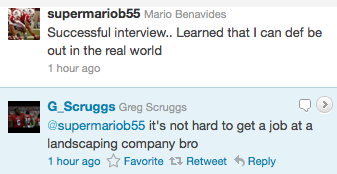 Ballin' is a Habit is counting down its top 140 players in the country. Gorgui Dieng has already checked in at No. 135 and Kyle Kuric at No. 124.

Karen Sypher is reportedly writing a book in prison that is titled (I'm not joking): Raped and Railroaded: The Karen Sypher Story. Well, history would seem to indicate that she's something of an expert on trains.

As expected, Bellarmine was named as the preseason No. 1 team in the country when the D-II coaches' poll was released yesterday. The Fighting Mike Rutherfords wll give Louisville all it wants tomorrow night.

The story behind the following video, which documents college basketball's most beloved technical foul.

Andrea Adelson talks about what's taken Louisville from a floundering 2-4 team to one right in the thick of the Big East title race.

"I told our players in those meetings, 'You tried it your way. Let's try it our way,'" Strong recalled earlier this week.

Since then, the Cardinals are 2-0 and squarely in the middle of the Big East race heading into a huge game at West Virginia on Saturday. Both teams are 2-1 in conference play, and a win would keep them near the top of the conference standings.

"Since the meetings, we've really got more trust with each other now," linebacker Preston Brown said. "You can see that in the locker room and everywhere else. We got stuff out in the air, and we became closer. We didn’t separate. Everybody was honest about what was going on, we respected everybody’s honesty and we came closer."

Had almost forgotten that this summer West Virginia was classified as the unruliest fan base in America. That stuff's all made up though. OK, some of it's not made up, but it's definitely overhyped. OK, it's kind of bad, but no worse than you'll find at dozens of other places throughout the country. OK, it's a little bit worse than most places. OK, it's the seventh layer of hell.

And finally, a very happy birthday to our man Chicken Knowles. May it be chock-full of monstah dunks and No. 1 specials with reverse dunks. Oh, and finger rolls. You can't forget about the finger rolls.