Louisville v. UConn Quick Preview: The Race to 6 (See what I did there?)

Share All sharing options for: Louisville v. UConn Quick Preview: The Race to 6 (See what I did there?)

With these two teams, the Race to 6 refers both to 6 wins and 6 points.

The BCS talk from a few weeks ago died down a bit after the loss to Pitt last week, but even though we are still mathematically in the race for an improbable and likely roundly mocked Orange Bowl berth, just making a bowl after early season losses to Ty Hilton and Marshall would be a huge accomplishment.  Especially since everyone (and I mean EVERYONE) is certain of the sky-is-the-limit combination of talent and experience of the 2012 Cardinals, getting an extra few weeks of practice and "big game" experience would be huge.  And to give this year's senior class one more game would be an extra benefit.

So who is the standing in the way?  This guy: 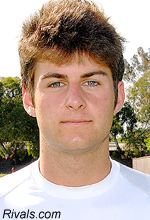 I think Dexter will enjoying sacking the smug off that guy's face hair.

I'll admit I have not watched one second of UConn football this season, and I feel I am a better man for it.  My only knowledge of UConn is following its hilarious, self-loathing bloggers on twitter during their games.  And from those tweets, my sense is that UConn is a defense first team, in part because of their coaching philosophy and in part because their offense blows.  I'm also only vaguely familiar with their skill position players: RB Lyle McCombs? WRs Kashif and Isiah Moore (related? no idea).  They have a dual-threat QB who may be starting today, and if they watched the Pitt game tape, maybe that's what they'll do.

UConn's record is weird: close losses that don't look too bad now to Vandy and Iowa State.  They lost to Western Michigan the same time we were losing to Marshall, and then they got blown out by West Virginia and Pitt, with a 16-10 win over USF sandwiched in between.   That was a crappy game I bet.  Anyway, they are coming off a 28-21 home win against Syracuse in a game I had no idea was played or who had won.

Oh well.  The point is this: with bowl eligibility on the line and dreams of the BCS receding, and a game next week against a reasonably good opponent in a place we've never won, today may be our best chance to get to 6 wins.