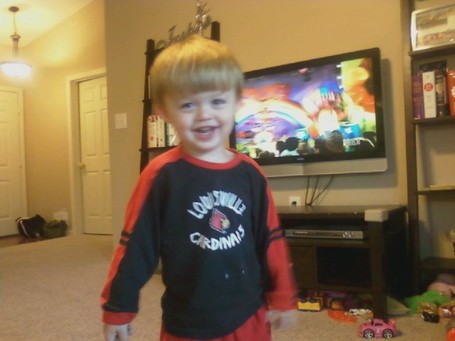 Apologies for the lack of content this week, but the hoops marathon, opening week coverage and some family stuff have demanded the bulk of my time. Sadly, the Syracuse stuff is probably going to demand some more today/this weekend. So it goes.

Louisville slipped from No. 7 to No. 13 in Luke Winn's latest set of power rankings for Sports Illustrated. Winn blames U of L's injuries for the slide, but the bigger story is what he blames the Cardinals' injuries on.

When it comes to defensive specialist-vs.-electric point-guard matchups, Butler's Ronald Nored vs. Louisville's Peyton Siva would have been hard to beat. As good as, if not better than Ohio State's Aaron Craft vs. Florida's Erving Walker (a battle that Craft won handily). But ... in the latest Unfortunate Event to befall the Cardinals' program, Siva has a bum ankle and isn't likely to play. Lousiville lost reserve forward Mike Marra for the season with an ACL injury, big-time recruit Wayne Blackshear for months due to shoulder surgery, and forwards Stephan Van Treese and Rakeem Buckles to lesser ailments. What did Rick Pitino do to deserve this? It's not as if he made a very regrettable realignment/relationship analogy at Big East media day, or failed to comply with the "Bring Chicken to the Bucket" campaign. It's unclear why the gods would have any reason to be angry.

For what it's worth, the word is that Peyton Siva has told multiple folks around campus that he will be playing Saturday against Butler.

So Saturday is going to be the first football/basketball dual open thread in the history of Card Chronicle. What's going to happen? The only guarantee is that it's going to be extremely sexual. 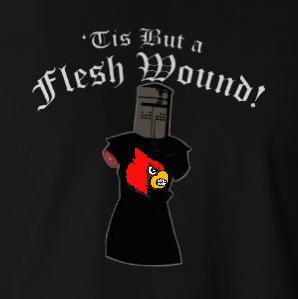 If you think you're tired of hearing about the Call of Duty stuff, imagine how the players feel. Lack of focus or intensity won't be to blame if they don't bring a victory home from Connecticut.

Future Cardinal opponent Long Beach State went on the road and knocked off Pitt by ten Wednesday night. The 49ers are the real deal and, unlike our beloved Cardinals, have managed to stay healthy so far this season. Maybe we should look into their practice methods:

Charlie Strong stated Thursday night that defensive tackle Randy Salmon will be sideline for the next four weeks because he has contracted mono.

Cali big man Robert Upshaw signed with Kansas State earlier this week, picking the Wildcats over Louisville, Georgetown and Fresno State. Upshaw and Andrew White had been U of L's two big remaining targets for this year's class.

Later in the week, CBS' Jeff Goodman tweeted that Kansas was White's clear leader for the time being. It's certainly a possibility that Louisville's 2012 recruiting class could end up consisting of just Terry Rozier.

Browning Nagle references aren't easy to come by in this day, but here's one from an ESPN recap of last night's NFL game.

The only way the Jets were going to lose this game was to give away points, and they did. For 55 minutes, their defense dominated the novelty act named Tebow, who played like a modern-day version of Browning Nagle. Then, on a third-and-6 from his own 25, Sanchez did the one thing he couldn't afford to do.

He forced a pass to Plaxico Burress, reading him the whole time. Goodman read it, snatched the ball and returned it 26 yards for the score.

No. 22 Bradley netted a late goal to top Loyola-Chicago 2-1 in the first round of the NCAA soccer tournament last night. Louisville will host the Braves (15-5-2) on Sunday at 7 p.m. at Cardinal Park.

The women's soccer team hits the road tonight for a second round NCAA tournament match at rival Memphis.

And finally, postseason is the motivation for the Louisville football team on Saturday, but Connecticut will be ready.