It may not have gotten off to the best start, but I'm not sure you can characterize any day that includes a commitment from a 340-pound lineman named Nacho Garcia as a bad one.

Garcia, whose real first name is Abraham, is a three-star recruit out of Fort Lauderdale (Fla.), who also had offers from Florida, South Florida and Marshall, according to Rivals.com. He also had reportedly received interest from LSU, Alabama, Auburn and others.

In July of 2010, Garcia was the focus of an Andy Staples piece (multiple Teddy mentions) in Sports Illustrated.

The word out of Florida is that Garcia is still probably a bit of a project, but that's fine when you're 6-6, 340. You can check out video of him in action right here. 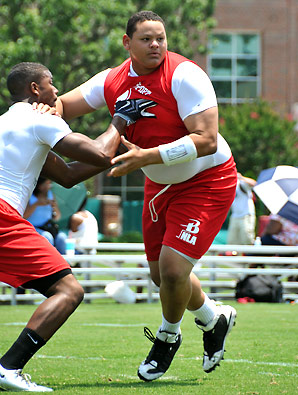