I haven't slept much this week and I have to wake up about six hours from now, so we're going to keep this super quick and then shift the focus back to beating Pitt.

No way to walk away from that opening night performance with any significant complaints. The rebounding numbers certainly weren't where you'd want them to be, but the Cards defended and passed like a team with nine or ten games under their belt.

Tennessee-Martin isn't very good, but Louisville did what good teams do to teams that aren't very good: they blew them out.

The video they played on the big screen after the game to honor Rick's 600th victory might have been the highlight of my year. It had everything, including maybe two seconds from his Kentucky tenure (grabbing the national championship trophy).

Hopefully someone puts that online so I can watch it without wondering if anyone around me is noticing the steady flow of giant tears (I cry big...literally...don't act like you don't want to see how big I'm talking about).

An emotional Pitino took the mic after the video and offered a quick statement:

A few other interesting thoughts from a very upbeat Pitino after the game:

--He loved Kentucky, loved the Knicks, loved Providence, loved Boston, but Louisville is the most special place he's ever been because of the people he works with. He's never been in a place where everyone - the administrators, the other coaches, etc. - are all in it together.

--He also made a comment about the media here being great. He addressed the fact that he made a "stupid analogy" about Pittsburgh a few weeks ago in New York. When he heard that Rick Bozich had taken a shot at him because of the faux pas, he said he was fine with it because the criticism was deserved.

--Winning 600 wouldn't have meant nearly as much to him if it hadn't happened at a place he loves.

--The past few years have really opened his eyes to just how foolish and ignorant he was in the past when it came to looking around for other jobs and not realizing what he had. The grass really isn't greener on the other side. Louisville and Kentucky are as good as it gets in basketball.

--Really seems to enjoy this team, and doesn't try to hide the fact that he believes it has the potential to be special.

It was pretty apparent early on that Peyton Siva has missed some practice time recently. After trying to do just a bit too much in the first five minutes or so, Peyton settled down and finished with ten points and nine assists. There wasn't a Skyhawk who could keep him out of the lane, as was expected. I really enjoy both typing and saying Skyhawk.

Probably the third person I saw once I walked inside the Yum Center was Peyton Siva Sr. That can only mean special things are on the horizon.

Couldn't have choked harder when it came to saying hi.

Really disappointing to see Gorgui Dieng not pull down a defensive rebound. I know he's not doing it consciously, but it really is amazing to watch how differently he goes after the ball on the offensive end.

Kyle Kuric said Timid Kyle would not be back this season, and he proved himself to be a man of his word on this night. Love Konfident Kyle.

You get me an MJJ-themed shirt and I'm not taking that s--t off until Derby. 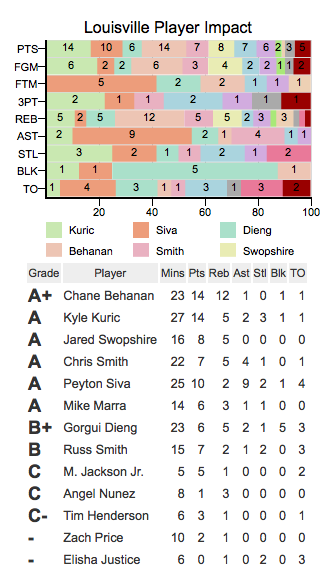 C? You know who else got C's? Lincoln. Also, me. Dicaprio probably had at least a couple. Actually, did he ever attend a formal school? How old was he in What's Eating Gilbert Grape? What are we talking about?

Apparently Bullet has been dealing with a few other nagging injuries, which is why Tim Henderson logged the majority of backup minutes at the one.

I love the way Hendo plays point. Pretty much because it's exactly how I play point: trot the ball up the floor like you're Maravich, then make simple passes and pray to God that no one realizes there's zero chance of you beating them off the dribble.

Purple shirt, Stephan? I don't even have to say it, but you know I'm disappointed.

Chane Behanan is a monster. 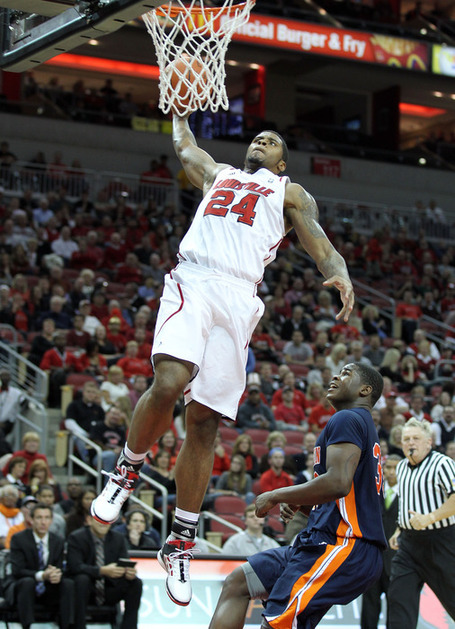 Also, I fear many Louisville fans are never going to pronounce his last name correctly. It's not "BOhannon," and it's not "Benahan."

I heard a dad tell his son after the game, "yeah, Jackson is solid but Bohannon is the real deal." Only half right, my man. At least it was the most important half.

First trip to the upper bowl this season and I'd forgotten how terrifying the escalator can be. It's like a slow-motion, soft-angled Hellevator.

Mike Marra played very well. He was a trio of terrific passes against their zone. He checked into the game much later than he usually does, and I like that he blatantly stretched out his back at the scorer's table. Just letting the people that there was a reason behind the delay in their nightly dose of Mike.

At first I was a little mad about the elimination of the Marra head nod in the new intro video, but the quick Mike zoom-in might be even better. There is zero chance of me seeing that once this year without giggling like a 3-year-old.

Our warm-ups are filthy. If filthy doesn't mean good anymore, somebody let me know and I'll change that. I like them. That's the point I'm attempting to convey here.

Batman from the student section wins fan MVP. He may have been the first person I've ever seen at a sporting event not win the shell game, but he still gave quite the overall performance. Wish he'd had more speaking opportunities.

There's never been a Cardinal I've been more confident in finishing a difficult non-dunk in transition than Chris Smith. Can we get a trophy with that distinction on it? Because I'll give it to him. He'd be happy to have that trophy.

If Russ Smith really wants to help this team this year, he'll start hoisting up hundreds of outside shots on a daily basis. Defenders are going to respect his first step, which means he's going to get as many open looks from the outside as anyone on this squad. If he can turn himself into a 35-40% three-point shooter then he's going to demand court time, even when he's occasionally doing things like shooting the ball backwards and with his left foot, or whatever insane thing Russ feels the need to do every fifth possession. 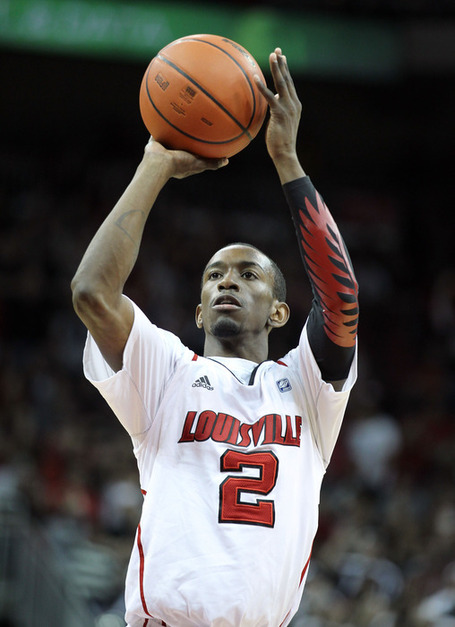 That is...that is hideous.

This wasn't quite as quick as I was hoping. I'm easily excitable. Some call it a plus.

We're going to be good.