Share All sharing options for: Game Day: Louisville vs. Pittsburgh 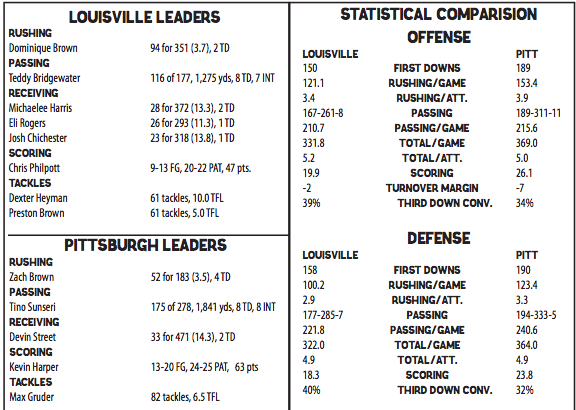 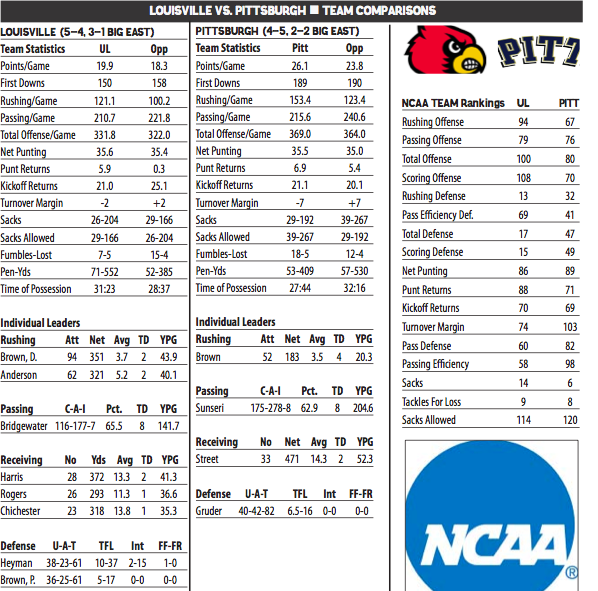 Last home game, Senior Day, a shot at a conference title and BCS bowl berth still in play, an opponent that's beaten us like a drum for the past three years; yeah, I'd say there's cause for excitement here.

It might take five figures to make me change at this point.

Bold Prediction: We fake a punt.

We were going to last week but got a delay of game. B.J. Butler (or someone) gets another shot this afternoon.

It's almost impossible for the player of the game picks to be more off than they've been this season, so yeah, this is what's happening.

I don't want anyone to be mad at me. Even you, Luke. Especially you, Luke.

--Pittsburgh has won the last three matchups in the series and have won those three games by a total of 76 points (25.3).

--The Cardinals haven’t scored more than 10 points in any of the last three defeats.

--Louisville is 3-2 at home against Pittsburgh, but dropped a 35-10 decision at Papa John’s Cardinal Stadium in 2009.

--The Cardinals were held to just three points and 185 yards of total offense in their visit to Heinz Fied last season.

--Five running backs are listed as co-starters on this week's U of L depth chart, so the guy on the field for the first offensive snap will be Victor Anderson, or Dominique Brown, or Jeremy Wright, or Senorise Perry, or Kamal Hogan.

--Pitt is first in the Big East and sixth nationally in red zone efficiency. The Panthers have converted 29-of-31 trips (93.5%) in the red zone (23 touchdowns and six field goals). The two failed attempts were missed field goals.

--Ray Graham suffered a season-ending right knee injury early in the first quarter against Connecticut Oct. 26. The injury ended Graham's bid for the Big East and NCAA rushing titles. Graham was leading the Big East and ranked second nationally in rushing yards (134.1 yards/ game) prior to the UConn contest.

--Something bad always happens to me on the day of the Pitt football game.

--Louisville is 3-0 when rushing for more than 150 yards and 2-4 when they fail to reach that plateau. The Cardinals have won the last two weeks despite failing to hit that mark.

--The Panthers are the worst team in the Big East when it comes to protecting their quarterback. Pitt QB Tino Sunseri has been sacked 12% of the time he has dropped back to pass.

--Pitt is sixth nationally (tied) and first in the Big East in quarterback sacks with an average of 3.22 per game. The Pan- thers have 29 total sacks on the season.

--Pitt is eighth nationally in tackles for loss with an average of 7.89 per game. Aaron Donald leads Pitt with 10.5 TFLs, Chas Alecxih is second with 10.0 and Brandon Lindsey is third with 8.0.

-- Pitt has given up only 19 total points in the first quarter this year. The Panthers are outscoring their opponents 73- 19 in the initial period. The only team to score a touchdown on the Panthers in the opening period has been USF (12- yard run by quarterback B.J. Daniels). That TD came on a 52-yard drive after a Pitt fumble.

--"They have a freshman quarterback who is an outstanding player and is going to be unbelievable. He has continued to get better every single week and they are the best defense in the league. I think they are number one in the conference in total defense. Coach Strong does a tremendous job. Louisville is a well-coached team and they are on fire right now. Our guys understand we have a lot to play for and you never know what is going to happen in this league." --Pitt head coach Todd Graham

--"They cover well, they stop the run well. We certainly have to make sure we execute our system, be precise on our routes and make sure that we don't make too many mistakes. They can make it very hard to go the length of the field, so we need to hit some big plays as well." --Pitt receiver Mike Shanahan

--"Now you've won three in a row, you're hoping the leadership will eventually take over on this football team. And guys will not get trapped where they listen to outside influences." --Charlie Strong

--"I've never been around a group of D-linemen that's as beat up as we are now. But to the kids' credit, they're battling, they're fighting. We're just losing a lot of time during the week preparing to get ready." --Clint Hurtt

--"We've been going hard every day in practice; we've been rushing on our scout team. I feel like we can get three or four sacks." --Marcus Smith

--"Our deal is he is a freshman quarterback and our defense knows what they have to do." --Graham

--"We were watching some of their weaknesses on film; we've just got to be able to tee off and take advantage of it. We know what we have to do. We just have to make it happen." --William Savoy

--"We just want to make sure that this is a one-game series. We don't want our fans to get too excited. If you look at us in that Kentucky game, we go and beat Kentucky. The next week, we go lose to Marshall. Not taking anything away from Marshall, but we know that each week you have to be prepared to play. We have to make sure our focus and preparation is there for our football team." --Strong

--"We don't want to get ahead of ourselves. You start talking about a bowl game and then get kicked in the face for the last three games. Now you're sitting here saying, 'I wish I would've focused on one game at a time.' That is what we've set out to do. The main focus of the players is just to take it one week at a time." --Greg Scruggs

I realize I've ended up looking overly pessimistic in recent weeks, but I'll be stunned if this one is anything close to easy for either side.