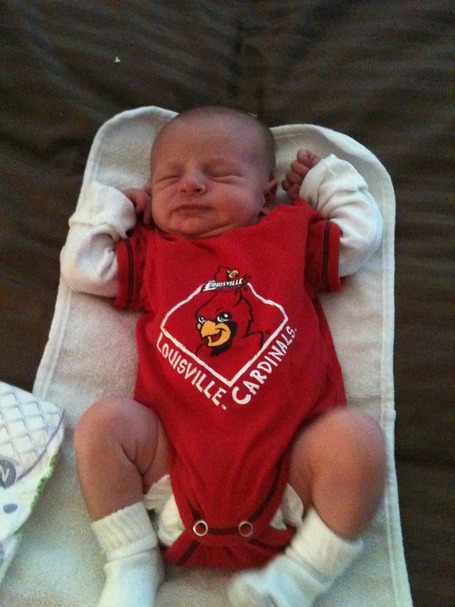 Should be a solid Broad Trip. I'll keep you updated.

Reports yesterday were that Navy and Air Force were both reticent to commit to the Big East because of the perceived instability of the league. With that in mind, the league is expected to offer invitations to both East Carolina and Central Florida fairly soon.

Because that'll show the world/Air Force and Navy.

Louisville is still almost universally considered to be the school "on deck" for a Big 12 invitation. Eric Crawford says the new cheer for Cardinal fans should be "Go Missouri" (to the SEC).

Lots of talk and rumors about the Mike Sanford situation, so let's address it:

Multiple members of the Lexington media hinted yesterday that there was some big drama on the U of L coaching staff and that the Louisville media was covering up. Finally, Matt Jones came right out and tweeted that he'd heard two members of the Cardinal coaching staff had gotten in a fistfight.

My understanding is that the situation never got that far. There was a fairly heated exchange at practice on Tuesday between Charlie Strong/Shawn Watson and Mike Sanford. Again, the friction between the two sides has been over the progression of Teddy Bridgewater and has apparently been building for a couple of weeks.

A current player did confirm to me that Watson called the plays in practice on both Tuesday and Wednesday (spoke to him on Wednesday), and my assumption is that he will be undertaking the same duties in Chapel Hill tomorrow afternoon.

Strong told C.L. Brown yesterday that Sanford was "still on the staff" but wouldn't directly answer the question of whether or not the offensive coordinator would be making the trip to North Carolina. Don't be surprised if Sanford isn't there tomorrow...or for the rest of the year.

So that's the dramz to the best of my knowledge.

Fomer Cardinal commit Negus Webster-Chan committed to Missouri this morning. And NWC wasn't even recruited by Fuller when he was at Louisville.

The Pitino/Calipari drama made it all the way to SportsCenter yesterday, with the KSTV clip getting some serious air-time. Pretty cool.

Speaking of Pitino, he talked to The New York Times yesterday about his sadness over the Big East breaking up, or at least being altered dramatically.

"It’s one of the most disappointing things I’ve seen in 35 years in the game to see this thing break up like this," Rick Pitino, the Louisville basketball coach, said. "We’ve stayed loyal to it all along. We’ve stayed loyal, and by staying loyal we’re not sure what’s going to happen to us."

Pitino can wax nostalgic about the Big East basketball tournament, which has emerged as the nation’s best conference event, but that does not seem to matter in a market driven by football.

"We should all celebrate this last year," Pitino said. "It could be the last year we have a chance to play and go through the Big East tournament."

Carolina spread has actually dropped to 13.5.

Carolina March says that the Louisville/North Carolina series has generally meant the start of something big for the victor.

The Tar Heels have been prepping all week for Vance Bedford's pressure defense, which leads the nation in tackles for loss.

Under the threat of lawsuit from season-ticket holders who claimed their tickets had been de-valued by the vacated season of 2007-2008, John Calipari, Derrick Rose and then-Memphis AD R.C. Johnson agreed to donate various amounts of money in order to settle the matter.

Calipari and Rose, according to the settlement agreement obtained Thursday by The Commercial Appeal, agreed on May 28, 2010, to pay a total of $100,000 to the three attorneys -- Martin Zummach, Frank L. Watson III and William Burns -- who were representing, in the agreement's words, "certain ticket holders." The amount was to be disbursed "as they agree among themselves."

And finally, many of the top recruits in the country will be participating in the John Lucas event at HOOPS this weekend. Head out there if you love basketball and have nothing else major going on.