I think it's fair to say that Saturday was the first real letdown of the Charlie Strong era.

Florida International at home is a game the Cardinals probably shouldn't have lost, but FIU is experienced and has a game-breaker on its roster. Plus, it was only the second game of the season for an extremely young Louisville team.

Poor talent and youth have been the post-loss battle cry for a while now, but this team is certainly good and experienced enough to beat a below average Marshall team at home. Especially when the Thundering Herd was coming off a loss to an extremely physical Virginia Tech team, and the Cards had the added bonus of an extra week of rest and preparation after their emotional victory over Kentucky on Sept. 17.

What's most disappointing is that, for the first time under Strong, balls did not appear to be played off. Players looked lazy for stretches, there were key third down stops where there was hardly any reaction from the Cardinal sideline; it was like victory was assured and they all just wanted the actual playing to just go ahead and end already.

I was far less optimistic about this season than the vast majority of Cardinal fans, but even I can't ignore the glaring truth that there's no reason for this team to not be 4-0 right now. Being 4-0 wouldn't solve any of Louisville's problems on the offensive line, it wouldn't make any of the 23 players who have seen their first collegiate action this year any more experienced, but it would make a bowl berth a much more realistic possibility, and we've all seen how beneficial a postseason trip can be for a program.

As it is, U of L is 2-2 with 1/3 of the season down, and there are only two games left on the schedule where it appears the Cardinals might have a shot to be favored.

Big East play doesn't start for another 12 days, but it's still hard not to feel the sensation of the proverbial wall inching closer and closer to our collective back.

Was really surprised to see us not take more shots down the field, especially when it became apparent that they weren't going to stop blitzing...ever. Mike Sanford's taken a lot of heat at various times over the past two year, and this is the first instance where I'm leaning toward believing it's deserved. You had two weeks to prepare for a defense that has only held an opponent to less than 30 points once. I understand that there are issues on the offensive line, but there were still more than enough playmakers wearing red and white on Saturday to move the ball consistently against the Thundering Herd.

Thirteen points and 60 rushing yards are both ridiculously low numbers.

With the exception of his last interception, I thought Teddy's play was again cause to get excited about the future. For a true freshman making his first start, I don't think anyone can complain about 20-of-29 for 221, especially considering the kind of pressure he was forced to deal with. There were a few instances where he probably needed to read blitz and hit a hot route or throw the ball away, but those are the types of skills that you really can't attain without game experience.

The quarterback position will not be an issue for the next two years, and that couldn't be more of a luxury.

No idea why Jeremy Wright didn't get a carry. Not sure if it was an injury, or punishment for his recent fumbling problem, but him not getting an offensive touch was awfully bizarre.

If the national news had to interrupt local programming to inform the world that a meteor was on track to hit and destroy Earth, there is no doubt in my mind that the first commercial immediately following that announcement would star J-Bone. When it comes to timing, the kid simply cannot catch a break.

Marshall go-ahead touchdown? Let's toss it over to J-Bone! Promising drive comes to disappointing end with a Teddy pick? Let's throw it to J-Bone who's with our Cardinal fan of the game! Your wife's been sleeping with your best friend AND your mom? J-Bone, what's the happs on the party deck?!

I know he made a big play against Kentucky, but I'm not sure Stephan Robinson is starter material at corner just yet. There were several plays where he looked totally lost, and a couple more where he was beaten badly on relatively simple routes.

I was surprised to see Andrew Johnson getting ready to come into the game when Robinson came up a little gimpy on a play in the third quarter. If Johnson is healthy it seems to me that right now he's the obviously superior player.

Crowd was great, I thought. Far fewer empty seats at kickoff and after halftime than either of the first two games. It was also extremely loud throughout the first half, and would have exploded had the Cards come through with a few early stops or conversions.

The rumors are true, I missed Trace Adkins. I mean I heard him, but I didn't actually witness him and the glory that is his hair.

And now Deener's unabashedly rubbing it in my face. 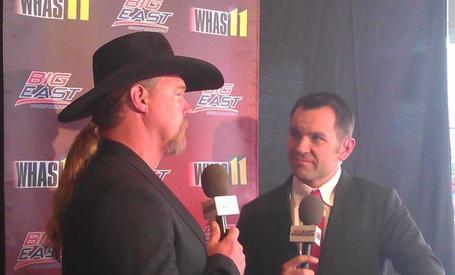 Blew a 20-0 cornhole lead for the first time in my life during tailgating. If I ever become an exotic dancer, my stage name will absolutely be "Mike Romo."

One of the few positives from Saturday was Senorise Perry making the most out of his first action at talback. Couldn't believe he was thrown out there for the first time on a key third and two, but he picked it up and then rumbled for 12 more yards on his only other touch.

There are skill players galore on this roster. You've got to make something happen with that.

No excuse for Dexter Heyman to be producing numbers like two solo tackles and four tackles total. Those days need to be behind you, my man.

The first third down conversion pass by Rakeem Cato on the game's opening drive couldn't have been more crucial. The stadium was going to explode with a stop, and it ended up being one of the first of many plays that deflated both the crowd and the U of L sideline.

Time to start running hard again, Vic. You're a senior. You aren't promised any more than eight games.

Good to see Jarrett Davis on the field making some plays. It appears he's the guy who has emerged from the seemingly interchangeable sophomore trio of Davis, Damian Copeland and Kai Dominguez.

Scott Radcliff's muff might have cost him his punt returning spot in probable fair catch situations. Not a great couple of games for the walk-on.

All right, we have to end this thing on a positive note, and I've got two blurbs:

1) For whatever reason, Louisville has played much better on the road under Charlie Strong, and upsetting North Carolina could have the same effect on this Marshall loss as upsetting UK had on the FIU game. Most people expected us to head into conference play with a 3-2 record, and if that ends up being the case, it doesn't really matter where the two losses came from.

2) We're still 0-0 in the Big East. Being the first Orange Bowl participant to suffer home losses to teams from both the Sun Belt and Conference USA would be...historic?