Share All sharing options for: Game Day: Louisville vs. Syracuse 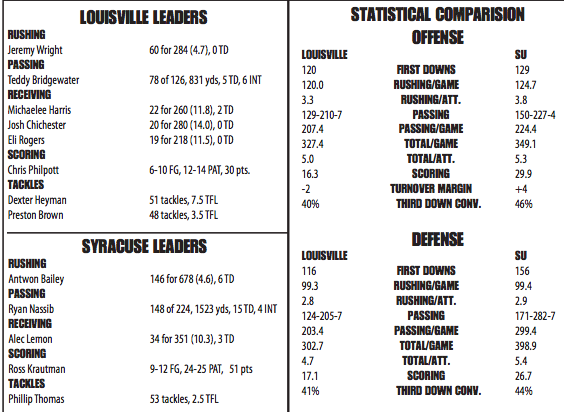 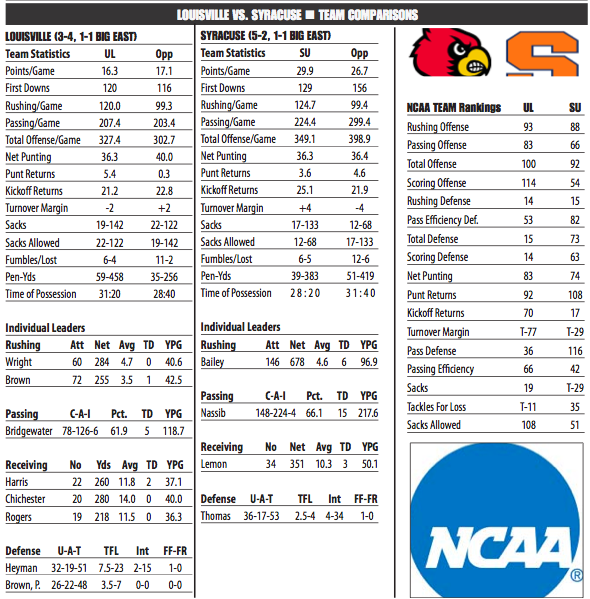 Same as last week. Finally witnessed my first D-1 win of the season, and this week presents a similar situation. No need to get frisky here.

Second half of the season Jeremy Wright = March Earl Clark.

Kid doesn't mess around when it comes to Syracuse. Kyle Kuric on the gridiron.

--The Cardinals are 4-2 against the Orange as a member of the BIG EAST, and have won two straight.

--Fresh of its dominating win over West Virginia, Syracuse made its first appearance this season in the national rankings. The Orange received 24 votes in the most recent Associated Press poll, released on Oct. 23, and 10 votes in the USA Today rankings.

--Louisville players will be wearing "AC" stickers on the backs of their helmets to honor senior cornerback Anthony Conner, who broke his neck during U of L's victory over Rutgers last Friday.

--The Cardinals are 5-6 at home under head coach Charlie Strong and have lost those six games by a total of 36 points (6.0 margin of defeat).

--Louisville is an impressive 63-23 at Papa John's Cardinal Stadium, but just 5-6 under Charlie Strong.

--In 1989, Syracuse defeated the Cardinals in the Coca-Cola Bowl in Tokyo, Japan, 24-13, representing the only time either team has played outside the United States.

--Louisville is 3-0 when rushing for more than 150 yards and 0-4 when they fail to reach that plateau.

--Louisville ranks 93rd in the nation in rushing, averaging 120.0 per game, which would be the lowest mark since 2002 when Louisville totaled 106.7 yards a game.

--U of L's Jeremy Wright’s 108 yards last Friday was the first 100-yard game by an individual for the Cardinals this season. It was also Wright’s first 100- yard game of his career, besting his 98-yard performance versus Syracuse last year.

--Seven games into 2011, Ryan Nassib is on track to have the most prolific passing season in the history of Syracuse football. Nassib is currently 148-of-224 for 1,523 yards and 15 touchdowns. He is on pace for 254 completions, 384 attempts and 2,611 yards. All three numbers would be school records. He is on schedule to set the SU season record for passing touchdowns (26) and to finish second in completion percentage and passing yards per game.

--In four of SU’s five wins, quarterback Ryan Nassib has led the Orange on game-winning or game-tying drives in the fourth quarter or overtime.

--Syracuse stepped up its rushing output in the last four games. In its first three outings, the Orange averaged 76.7 rushing yards per game and averaged 3.0 yards a carry with two rushing touchdowns. In the last four games, those numbers have jumped to 160.8 yards rushing per game, 4.2 yards and per carry and four touchdowns. The Orange rushed for a season-best 194 yards in its win against West Virginia on Oct. 21.

--The Cardinals are 1-5 under Charlie Strong when trailing after halftime and 0-7 when losing after three quarters.

--On the flip side, the Cardinals are 7-2 when leading after one, 7-4 when leading at the half and 9-4 when they have the lead after the third quarter.

--Against Rutgers, Louisville started a season-high seven true freshmen — four on defense and three on the offensive side.

--Syracuse is tied with Utah for 15th in the country in run defense. The Orange is allowing 99.4 yards rushing per game this season. SU has kept three of its seven opponents (including both of its BIG EAST opponents) to less 100 yards on the ground this season.

--Since defensive coordinator Scott Shafer took over in 2009, the Orange defense has held its opponent to less than 100 yards rushing 12 times and SU is 9-3 in those games, including a 2-1 record this season.

--SU has not allowed a 100-yard rusher in the last eight games.

--The Orange is 9-2 under head coach Doug Marrone when holding its opponent to less than 300 yards of total offense, including a 1-0 record in 2011.

--Scoring touchdowns in the red zone has been a problem for the Cardinals all season, scoring just seven times in 15 tries inside the opponents’ 20-yard line.

--The Cardinals are tied for 116th in the nation in red zone success this season.

--Louisville tight end Josh Chichester has caught a pass in 18 straight games after catching two passes for 19 yards in the win over Rutgers last Friday night.

--Syracuse’s margin of victory this season (9.2 ppg) is the second- narrowest among FBS teams with at least five wins. SU’s five victories have come by a total of just 46 points, including two in overtime.

--"We are playing a football team that we have not beaten since I've been here, a team that is built or may be better suited for exposing things that we have been inconsistent with during the year. It's going to be a great challenge for us." --Syracuse head coach Doug Marrone

--“Syracuse is an outstanding team. Ryan (Nassib) does a good job of just managing the offense. Defensively, they come with a lot of pressure, similar to us.” --Charlie Strong

--(Ryan Nassib) runs that offense to perfection. He's grown up a lot since last year so we're really concerned about that. He executes extremely well." --Vance Bedford

--"Obviously, If you beat West Virginia worse than the No. 1 team in the nation did, you know we're going to have to put up some points." --Jake Smith

--"With a great performance comes great expectations. People are going to expect to see that every week. We're just not focusing on the game after next or what’s happening in the future. Everybody is focused on the game at hand. Since this coaching staff has been here, they haven’t beaten Louisville. We’re just looking to really focus on the stuff that got us beat last year." --Syracuse defensive end Mikhail Marinovich

--"We’re starting to grow, but we have to keep growing and not get complacent. As a young team, you take success and you tend to get fat and happy. Our coaches are doing a good job of keeping us grounded." --Mario Benavides

--“It’s been five years since we’ve won back-to-back conference games. That’s a long time. Now you have two at home. Let’s see if you can go play well enough at home to win the next one.” --Charlie Strong

--“It would be huge. We need every win we can get. We have five more games left and we’re approaching it as five one-game seasons. It’s vital for our program to come out and win this game.” --Jake Smith

It would be an understatement to say it's been a rough week for all of us. This would be very, very nice.