It's never until that first exhibition game that I remember how I feel during the five months or so that Louisville basketball is active. It doesn't take long for the feeling to return.

Some people have music or art or hiking; we have Louisville Cardinals basketball. It's just who we are. It's just what we do.

The intro video was the same, which was fine with me because seeing it again made me happy. As much as I love the video, if they're going to use it I do hope they at least edit it to exclude the players who aren't on the team anymore (love you, Preston). It just feels a touch awkward with them in it.

The Marra head nod was what officially brought me home for good. 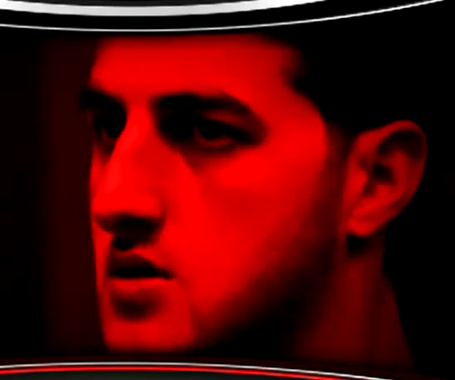 Had ridiculously nice seats about six rows behind the bench. 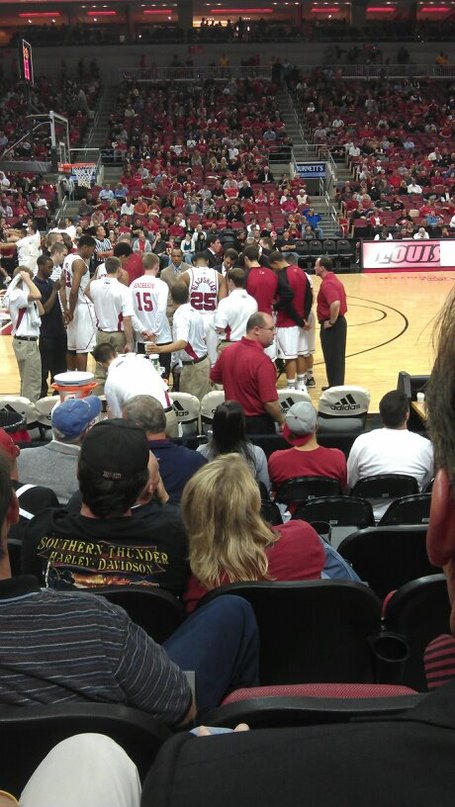 Easily the best part about such a situation is being able to listen to Rick Pitino. At one point, Gorgui was walking over to the bench and said something in response to a Pitino question, at which point Rick came back with a sarcastic, "I know it's your bad. That's why I took you out of the game."

He seemed especially frustrated with Peyton Siva all night (after the game he told Bob Valvano it was the worst game he's seen Siva play in a long time). He yanked him near the end of the first half, and when Siva didn't look especially pleased by the move, Pitino launched into a quick lashing that included a BS bomb. It was cool.

It's remarkable how imposing Gorgui Dieng has become. I don't know if you can tell on TV, but he just stands out in a way that he never did at any point last season. The potential is there for a breakout season that no one will see coming but us.

Wednesday proved that once again there isn't an opponent that will outwork Louisville this season. Without a doubt, my absolute favorite aspect of the Pitino era has been how hard all his Cardinal teams have played. There were times in the '90s when I felt like I cared more than some of the players, and it made me feel awful. Because of that, I can't tell you how much pride I've taken in the effort the guys in red and white have put forth over the past decade.

At one point, we had our equally irreplaceable center and point guard going air born into one another for a loose ball. Knowing that is going to be there night in, night out is a luxury that a lot of fans of other programs simply don't have. Not that it didn't scare me shitless.

Also might be why Peyton has a black eye.

I can't believe I'm about to say this, but that is not adorable.

Of course I'm joking. When I look at that black eye all I see is a dozen golden retriever puppies doing a choreographed dance routine with the little girl who sang "Super Bass" on Ellen with Nicki Minaj.

The guy whose hustle was perhaps the most evident was Chane Behanan. The kid will be referred to as a "monster" no less than 1 billion times over the next five months. Basketball players...no, check that....human beings just aren't supposed to have legs that large.

He probably doesn't have the best odds, but there's a very real chance that Behanan will lead this team in scoring because of the way he gets his points. He has the skills to score consistently in the post in one-on-one situations, but the bulk of his scores are going to come from put-backs and fast breaks. He's the type of guy who's going to hustle to the other end of the floor even when it looks like his teammate has an easy bucket, and be there when that teammate astoundingly blows the gimmie. Those are the types of points that win games, and that's what Behanan is going to bring to this team. We're all going to love him.

A lot of people voicing their concern over the backup point guard position today, and I think that might be jumping the gun just a tad. Yes, Bullet had three turnovers, but he's also just coming back from an injury. He played much better once he was able to get into the flow of the game, and his stroke looked great on his one three-point attempt. Maybe I'm being overly optimistic, but I really think Elisha is going to be fine to provide the solid 8-10 minutes a game we need from him.

Also, did anyone else think his arms were just a tad smaller than they were a year ago? I thought it was just me, but a friend made the same comment at halftime.

Don't let that title go to your head, my man. Stay up on your GCB (Gym, Class, Basketball).

After the game, Pitino said something to the effect of Jared Swopshire needing to get on top of his game or he was going to get left behind. I don't think this was Pitino-speak. Jared looked way too tentative out there, and it's hard to see him being a main contributor on a team this deep if he doesn't get over the timidness that appears to be plaguing his game.

Couldn't be more disappointed by the performances from the players in street clothes. Rock was decent and Russ was the only other guy who was borderline acceptable.

Luke Hancock: Adidas sweatpants paired with a striped U of L polo? I'm gonna go ahead and need you to step things wayyy up. You transferred from George Mason. That's a D.C. school. You brought these expectations on yourself.

Chris Smith from the right wing is approaching Kyle's Korner status. It's lack of a potential alliterative title is really going to hurt its growth though.

Great performance by Chris, who appears to be in tremendous shape and ready to once again be a rock for this squad.

Side note: I have a friend who lives in the same apartment complex as Chris and I keep begging him to get the same necklace (is it a rosary?) tattoo that CS5 has. You want an ice-breaker? Show up at his door with your shirt-off and that identical tat on full display. Best friends.

Guy sitting on the floor right on the edge of press row next to Eric Crawford looked dead up like a 15 years younger Mike Krzyzewski. Can't say I wasn't distracted.

Not a big fan of Pikeville going with the "UPike" brand. It just...it just doesn't work. You already have to wear orange, just go "Pike." Or better yet, just go "Pikeville."

About halfway through last season, Jody Demling tweeted out that Kentucky's leading high school scorer was "Hobo McCoy." Right then I envisioned Hobo's future: the center of a heated recruiting battle between Louisville and Kentucky, Bluegrass State fan favorite, and then of course political office ("At a press conference in Frankfort today, Kentucky Secretary of State Hobo McCoy announced..."). Apparently it's not going to happen, as Hobes is pulling mop-up duty for UPike. Really wanted to see him let one fly, but some dreams demand patience.

I continue to be pleasantly surprised by Zach Price, but a lot of that is because my expectations for him were pretty low. He's definitely not ready to bang in the post with Big East bodies, but he's a lot closer than I thought he'd be. He's a big man with natural skill, and that combination can always result in considerable improvement.

I still think you have to go with Van Treese as Gorgui's primary backup at the five once he's healthy, but we'll see.

Walked out right next to Samardo Samuels. Taller than I am.

I'm hesitant to even mention Wayne Blackshear since he took the floor last night fresh off of his first and only collegiate practice.

When do you think the last time Wayne Blackshear played in a basketball game where he didn't score was?

Some interesting game notes from U of L:

--The Cardinals have now won 24 straight exhibition contests dating back to an 87-86 double-overtime loss to the Global Sports All-Stars on Dec. 2, 2000. Louisville has not lost an exhibition game in regulation since the Athletes in Action dropped the Cards 74-62 on Dec. 9, 1996, in Freedom Hall.

--Led by sophomore Gorgui Dieng's six, U of L registered 11 blocked shots on the evening (including eight in the second half alone), its most in an exhibition game over the past 31 seasons.

--Louisville finished with 55 rebounds in the contest, its highest total since recording 56 in a win over the Premier All-Stars on Dec. 11, 2002. U of L is averaging 51.7 rebounds per game during exhibition play over the last two seasons.

I can't tell you how comforting is to live in a Bone-free world at the Yum. Joey Wagner provided that calm, I don't feel like killing myself right this f'ing second presence that has been so noticeably absent at Cardinal home games for the past year and-a-half.

They threw peanuts into the crowd at one point. Totally cool with that. Love peanuts.

No. 24 on Pikeville bitched more than a drunk girl at a museum. I swore at one point I saw tears.

Spent a halftime down in one of the "lounges" for the first time. Talked finance, clinked martini glasses; you know, the yoozh. I hope you all got that I was going for the slang abbreviation for "usual" there. It's just that there's no easy way to spell it out. You always hear people say it, but how many times have you actually read it? Seriously, I spent more time thinking about which direction to go than I did on the first 12 Cardinal head bullets combined.

We get five months of this, people. Couldn't be more excited for the ride.