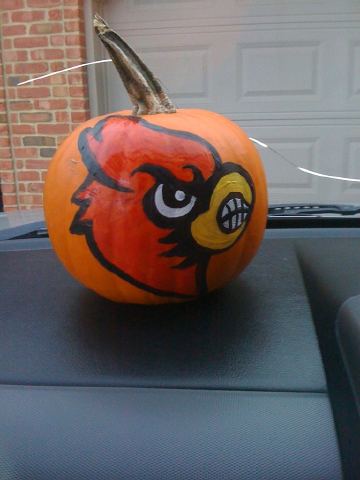 Apologies to the baby/pet 'Cloid parents/owners, but we're going to have to cut you in line this week to get to a few submissions while they're still seasonally-appropriate.

Louisville's Nov. 5 game at West Virginia has been scheduled for a noon kickoff. Of course it has.

Kid's got the attitude down. Louisville fans are going to fall in love.

After three rounds of play, Taquan Dean is the leading scorer in Italy's top-level SerieA league. Dean, who is averaging 21.7 points per game, is coming off a 26-point, 6 rebound, 4 assist performance over the weekend. 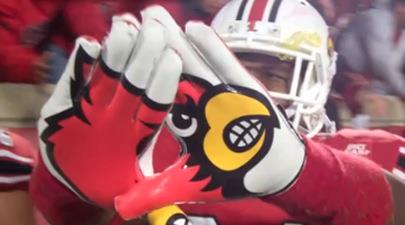 Spoke with a doctor in the know this morning, and he said that if one of his teammates had tried to pick Anthony Conner up after his injury, he never would have walked again. It's really scary when you watch the replay, because Roy Philon bends down to grab Conner and then pulls away when he sees the trainers rushing up to his side.

This is a terrible situation that could have been much, much worse.

Also, for anyone looking to send well-wishes Conner's way (a group that includes my mom), here's the address:

Somebody asked me the other day if I'm still upset that kids no longer dress up as astronauts for Halloween. I think it's more that I don't understand it than I'm upset about it.

Arguably the biggest news to come out of media day was Rick Pitino saying that Jared Swopshire would definitely be playing his last season as a Cardinal. Not particularly surprising, but still disappointing, I think. Still, there are a lot of people around the program who have been saying since the summer that if Swop were to have a big year his situation might change. My understanding all offseason has been that Swop's situation is a wait-and-see one, and I wouldn't be surprised if that's still actually the case.

Interesting note from the Star-Ledger: Friday night's U of L/Rutgers game on ESPN2 drew twice the number of New York City viewers as the Syracuse/West Virginia game being played at the same time on ESPN.

The latest TV ratings from Friday night's two Big East football games show the Rutgers-Louisville game on ESPN2 having more than twice the viewers in New York City than the Syracuse-West Virginia game on ESPN, a meeting that featured a ranked team (the Mountaineers). Both games started at 8.

Rutgers-Louisville drew a 1.45 share in New York City compared to 0.7 for West Virginia-Syracuse, according to the Nielsen ratings released today.

That rating tied for fourth all-time on ESPN2 for a football game viewed in the New York City area.

Bowling Green just got a new arena and convocation center and wanted to acknowledge the folks who made it happen. This is probably the best way they could have accomplished that:

Louisville is out of the cellar and into fifth place in the latest ESPN Big East power rankings.

5. Louisville (3-4, 1-1). Louisville jumps from last to No. 5 after a big win over Rutgers. That gives the Cardinals a win over a team with a better record than any of the teams in the bottom three.

Syracuse and Louisville are both dealing with the same issue heading into Saturday's suddenly crucial Big east tilt: handling success.

Mike DeCourcy sends a big F U to everyone trying to avoid realignment talk by noting that South Florida could be a wild card choice for the Big 12.

And finally, U of L has some more free video/audio from this afternoon's media day festivities.