Share All sharing options for: Game Day: Louisville vs. Rutgers 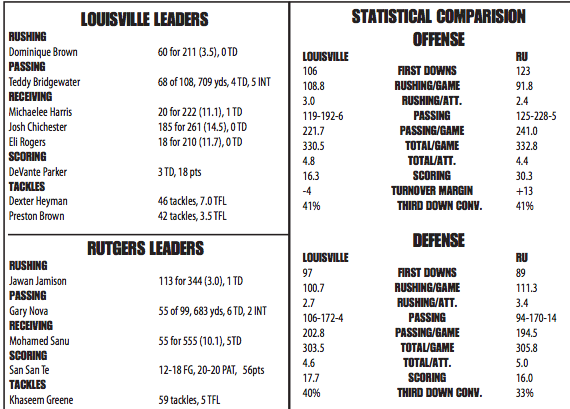 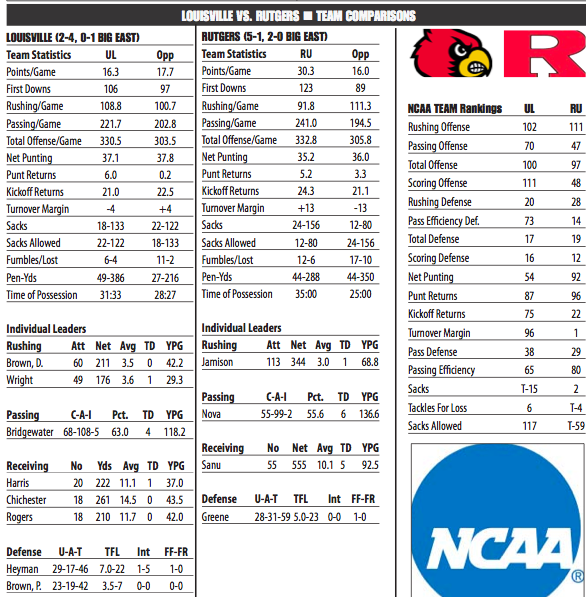 I really don't care for the Rutgers football program. Plus, it's a Friday night game.

Not as sexy as the Carmody jersey (appreciate all those who said hi last week...don't appreciate the UC fans who pronounced it "Car-MOH-Dee"...that was a low point...bags), but I'm taking my road trip failures pretty hard and am going back to square one.

The only game I haven't attended this season is also Louisville's only win over a D-1 opponent. This is a fact I am painfully aware of. Could be a big night for this rookie wardrobe.

Pregame Meal: Think we're doing hot dogs on Grillimus Maximus. I'm enthusiastic. Also, I'm not bringing cookie cake tonight. The last two times nearly half of it has gone uneaten. It's an insult to the Mike Rutherford special. I have discovered that this fight is not worth fighting (Dispatch).

Bold Prediction: The game is decided by either a made or a missed field goal in the final minute.

Bold predictions have been spot on in recent weeks, and that makes me terrified about the sentence I just typed out. Not this one, the one before it. No, the one before that one. The one about the actu---whatever, you know what I'm talking about.

Also, the stars of the game have not been anywhere near close in recent weeks. Should have gone Schiano here. Wish my backspace worked. Also wish I hadn't just typed "backspace." This isn't '97 computer class, Rutherford, as badly as you may want it to be. Where am I?

--Louisville and Rutgers have played on Thursday or Friday on ESPN or ESPN2 in all six meetings since Louisville joined the BIG EAST in 2005.

--Rutgers is looking for its first five-game winning streak since 2008.

--The Scarlet Knights ranked last in the nation with 61 sacks allowed last year, averaging a little over five per game. In 2011, Rutgers is tied for 59th in the NCAA, allowing 2.0 sacks a game (12 sacks total).

--The Cardinals are 4-6 at home under head coach Charlie Strong and have lost those six games by a total of 36 points (6.0 margin of defeat).

--Louisville has struggled to score points this season at home, averaging just 17.0 points per game. The Cardinals haven’t scored more than 30 points in a home game since putting up 56 points on Oct. 9, 2010 against Memphis.

--The Cardinals have scored just seven points at home in the second half this year and haven’t scored in the third quarter this year. Louisville tallied 21 first-half points in a win over Murray State to hold on for a 21-9 win. The Cardinals jumped out to a 13-7 lead at the half against Marshall, only to fall 17-13 to the Thundering Herd.

--Since 2002, Rutgers is third nationally with 51 blocked kicks, including four this season. In the 21-20 victory over Navy, junior CB Brandon Jones blocked Navy’s attempted go-ahead field goal attempt with 4:43 remaining to preserve the one-point victory.

--Friday’s game should feature each team starting a true freshman under center at quarterback. Rutgers’ Gary Nova is 2-0 as a starter this sea- son while Louisville’s Teddy Bridgewater is 0-3 as the starter.

--Bridgewater has been sacked 14 times in six games while the opposition has sacked Nova seven times.

--Nova will be making his first career road start tonight.

--"We don’t have a championship game so, again, I don’t know how many (wins) it’s going to take. But you know one thing, this counts for one-seventh of it." --Greg Schiano

--"I think we’re just going to approach it like any other game, any other team that we play week in and week out. We just have to go out and do what we have to do and do our job and our assignments and those things will take care of themselves." --Rutgers linebacker Khaseem Greene

--"You take the confidence measure with (Teddy Bridgewater's) knowledge of the game, and how easy it comes to him, he’s really kind of catching a stride right now. He’s done a nice job for us." --Shawn Watson

--"I think (Sanu) may have 55 receptions and the next closest guy is like 13. So you know where the ball is going and he’s making plays. I mean he’s making unbelievable catches for them." --Charlie Strong

--"Offensively, I think they’re in transition a little bit, with coach Watts kind of calling the plays now. He has a long history. He’s a very good coach. We have to look at things a little different when he’s calling." --Greg Schiano

--"They snug up and they really challenge you, they really try to suffocate you. What they take away, you give something up, too. There’ll be some things that are out there for us that we have to take." --Shawn Watson

--"Maybe they probably are testing me, maybe they’re testing our offense. Everybody talks about how young we are, but I feel like if we execute we’re able to face any defense." --Teddy Bridgewater

--"He (Strong) and coach Schiano are very alike. I met (Strong) on media day and they seem like they would get along very well. I know on defense they do a lot of things very similar to us. I think it’s like a mirror image." --RU safety David Rowe

--"I love watching his defense play. Me being a defensive guy, Greg and I are good friends and we’ve seen over the years what has happened (with defenses). He does a good job of (defensive) pressure and he knows how to take advantage of weaknesses of an offense. Because one thing when you bring pressure is you have to know when is the right time and how to continuously bring it, and he does." --Charlie Strong

--"Charlie is an excellent coach. He’s an excellent person. Charlie is respected across America, and it was long overdue for Charlie to get his first head-coaching job. He’s been a great defensive coordinator at several different places over the years. He’s a guy you like to compete against. His teams are always prepared." --Greg Schiano

--"I would hope we wouldn’t look past anyone. With what we’ve been through already, nothing’s been easy for us, not this season, nothing. Certainly the second half of last year wasn’t very easy. So I think our guys understand who we are, and we’re a blue-collar team. If we go out and play hard, we have a chance to win. And not just on game day, but in practice, play to win. We’re not good enough not to do that." --Greg Schiano