Seeing as how the all-time series between Louisville and South Florida is 24-3 in U of L's favor, and how just four of those 27 games have been decided by less than six points, there really isn't all that much exciting history to cover in preparation for Sunday's tilt in Tampa. The only game in the series that really stands out in my mind is the '98 loss, and that's just because it happened during a snow storm (Louisville-speak for six or seven inches) and was the day before I got to practice with Troy Jackson (we got to practice at U of L since our gym had been overtaken by the annual Science Fair...which I did not place in).

After deciding that dedicating an entire post to a single game I don't remember all that well was a less-than-stellar idea, I came up with an even more less-than-stellarer (word) exercise: Trying to remember the names of as many South Florida basketball players (players on this year's and last year's teams excluded) as possible without cheating.

I came up with five. If you can beat that, well then keep it to yourself because it will make me angry.

Jackson was really the inspiration for the exercise, and is still the name I think of when I think about USF basketball (11 hours a day, every day). His most notable achievement was overtaking Marques Maybin - who would eventually go on to much bigger and better things -  for the honor of being the all-time leading scorer in Conference USA, a distinction he still holds. Remarkably, Jackson did not start until his senior year. He was C-USA's Sixth Man of the Year in both his sophomore and junior seasons, and led the nation in scoring among players coming off of the bench both years.

This one was kind of cheap because I know that Atkins went to USF, but I can't remember anything he actually did as a Bull. Him making a name for himself in the NBA is the only real reason I know that he spent his college years in Tampa.

Chucky had a rough go of it against Louisville, taking on the Cards in the Metro days when the pair met twice every season but one. Atkins nearly led the Bulls to wins over U of L twice, but he finished his career 0-7 against the Cards, and lost those seven games by an average of 14 points.

Jones, who declared for the NBA Draft in 2006 after his sophomore season, just makes the cut. He was a good, but not great player with a lot of skills when he was at USF, and I was shocked when he decided to leave school after two seasons. Still, he was drafted in the second round by the Hawks and now plays for the Pacers. 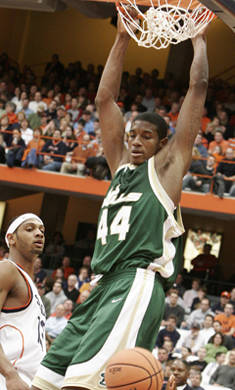 I totally remembered his first name being C.C., but this is my game and I'm letting it slide. If you don't like it feel free to stop reading here and go back to work or studying or sidewalk shoveling.

That's what I thought.

My memory has painted Waldon as a Ben Wallace-esque beast in the paint, but while numbers reveal above-average rebounding stats, they also show a pure scorer who wasn't afraid to take his game outside the lane. He ranks fourth on USF's all-time scoring list, eighth in rebounds, and tenth in three-pointers made. He also holds the dubious distinction of averaging more than three points less in his senior season (12.9 ppg) than in any other of his three years as a Bull.

You tend to remember the names of white guys who exist on a team solely to shoot the ball from beyond the arc, and Kohn is a testament to that. I can't find the stats online, but I'm just about positive that he the main culprit behind a 73-67 win in Denny Crum's last season.

After resigning myself to the fact that I wasn't going to be able to come up with any more blasts from the past, I checked out this year's USF media guide and searched for any obvious names that I blanked on. There was only one player that I really should have remembered, and that was Terrance Leather who graduated three years ago. There were other familiar names like Melvin Buckley and Will McDonald, but I never would have remembered those guys without being reminded or reading about them somewhere.

I'm not really sure what this proved or accomplished, but, uh, beat South Florida?