The Louisville Cardinals opened Big East play by breezing to a 73-54 victory over visiting Seton Hall Wednesday night at the KFC Yum Center.

Peyton Siva and Mike Marra led the scoring with 14 points apiece while Stephen Van Treese came off the bench to snatch ten rebounds.

U of L didn't take it easy on former assistant Kevin Willard, racing out to a 24-2 lead and never letting the margin dip below 12. 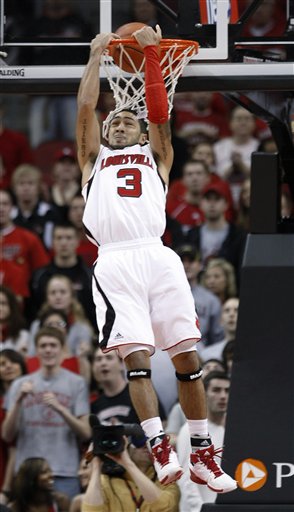 George Goode getting the start was the type of stuff we usually don't see from Pitino after New Year's, but it happened. While Pitino may have been doing it to send a 5,000th message to Terrence Jennings (or, more likely, to the many fans who questioned why Goode never saw the floor against Kentucky), it made the fact that Goode didn't play a second in a rivalry game where the opponent was dominating the inside all the more bizarre.

You didn't need to be a basketball expert to notice tonight that Goode isn't going to set the world on fire with his athleticism or that he might not be in the best of shape, but he's a big body, and that's exactly what the Cards needed to keep uncontested Josh Harrellson (arguably less athletic than GG) dunks from happening.

He shouldn't be starting, he shouldn't be playing 15-20 minutes a game, but he should absolutely be utilized in situations like the one that took place in Kentucky. He also should get his final year here.

Mike Marra was 3-for-3 in the first half from distance before CardsFan922 started texting and tweeting about how he was "not going to say anything." He made no field goals in the second half.

You just don't get it, do you?

Someone has got to get through to Terrence Jennings, and quickly. He is way too in his own head right now and playing at a level far below the one he's capable of. At one point U of L was losing 20-7 with Jennings in the game and up 51-19 with him on the bench.

I may be wrong, but I don't think we can play win half or more than half of our games in this league without him at least being honorable mention All-Big East good.

I feel like every Seton Hall basketball player, outside of Fuquan Edwin, has been there for six or seven years. It's probably because they haven't gone more than seven deep since we've been in the league, so everyone who plays, plays a lot.

George Goode got tired just looking at that.

The number of recommended comments on Card Chronicle is about to increase drastically.

Over/Under on how many times a Louisville fan has mistaken Preston Knowles for Chris Smith during a game or vice versa: 10,000.

The fact that Smith is now taking (and making) crazy runners in the lane isn't helping.

If Seton Hall doesn't at least start trying to molest opposing players, then they're never going to get this thing turned around.

The Kentucky loss sucked and there's still a lot to be concerned about, but the post-NYE freakout (not so much here, but, yeah, a little bit here too) was just a tad much.

We are 12-2 and 1-0 in the Big East. Not one of us would have turned that down in October. Before the season I thought we'd drop three of the big four non-con games (UNLV, Butler, UK, Western) and then one more "bad" loss and head into league play at 9-4, and honestly I was OK with that.

As it is, Louisville has put itself into a position where it doesn't have to play way above its head in Big East play to make the NCAA Tournament. As it is, a .500 record with a couple of quality wins will probably do the trick.

I'm not saying that any criticism of what took place against Kentucky wasn't warranted, or that this team is going to contend for a Big east title, I'm just saying...let's chill out and see what happens here. All things considered, I don't know how anyone could label the season to date anything less than "good."