Share All sharing options for: 18 quick thoughts on Louisville/Connecticut

Because 19 would be completely overdoing it.

1. I've toned down the adult language on this site significantly in recent years, but every now and then it's absolutely necessary. This is one of those times, because there's really no other way to say the following: this team is tough as shit.

Mentally tough, physically tough, selfless; if you haven't fallen in love with this team yet, well, you're probably the evil guard from The Green Mile. Didn't know you were a Cards fan, Percy, and quite frankly, I'd appreciate it if you'd stop reading my blog.

There is a 100% chance that things don't stay this rosy for the next eight weeks, but when those dark times do come (perhaps including tonight) we should all try and remind ourselves of the respect these guys have earned. You can make a case that this is the second or third least-talented team Pitino has had at Louisville, and here they are sitting alone in second place in the nation's best conference.

I've done it several times this year, but I will never count this team out again. They've earned that.

2. If Peyton Siva does end up becoming the All-Big East performer we know he can be, this will have to be the stretch we all look back to and view as the breakthrough in his progression.

Also, how adorable was the dunk that sent the game into double overtime? I mean he didn't even move the net! So cute.

3. In the past two months, I have watched three U of L sporting events at my friends Chris and Ashley's apartment: the College Cup win over North Carolina, the Beef O' Brady's Bowl, and Saturday's win over UConn.

5. Just as we all blamed CardsFan922 for the demise of Mike Marra's season (and rightfully so), I think it might be time to start giving hot hot credit for the revival of Terrence Jennings'.

7. Couldn't have been happier that Shabazz Napier clanked one of his free-throws after trying to start something with Siva for absolutely no reason.

8. Best defensive game of the year. We made Kemba try to beat us from the outside (he didn't), we adjusted to keep Lamb from getting space in the middle of the zone, and we did a fantastic job of not collapsing on their bigs when the help wasn't needed.

9. Aside from his horrendous pass near the end of the second overtime, Mike Marra was fantastic. It goes without saying that we don't win if he doesn't bury that three in the last minute of overtime.

10. How many times did Preston walk before finding Kuric for the three that tied the game at 55? At least twice. 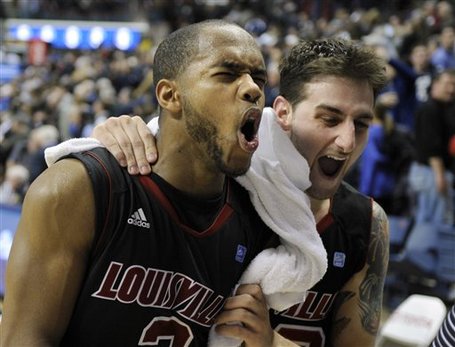 12. What sort of magic substance did the people in Storrs put on the floor that made us slip every 15 seconds but seemingly had no effect on the Huskies? Chris Smith changed shoes about five minutes in and it did no good. If Siva doesn't make a hell of a block with the score tied at 64, a slip may have ended up costing us the game.

13. Your official down by five at the half resume from the past two seasons:

16. Kemba apparently talked trash to Russ Smith - "Hey there, little Russ" - after a made basket in the first half. Way to aim high. You're the front-runner for the Wooden Award and you're going after a guy averaging less than three points a game.

Tim Henderson, if there are any skeletons in your closet you may as well come clean now, because Kemba Walker will be busting them out at some point during the return game. 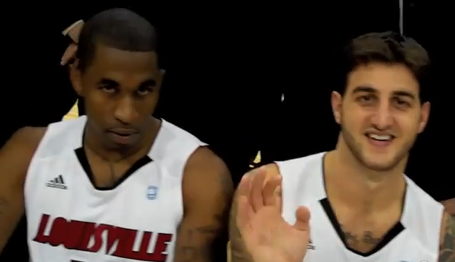