Yeah, so, the Louisville/Marquette rivalry is definitely alive.

After Francisco Garcia's three beat Marquette in 2005, I remarked that "I had never given up on a game more." That was still the gold-standard for omg victories until this morning/afternoon.

Louisville's 24-5 run in the last five minutes of today's game against Marquette was perhaps the most amazing thing I've seen in 26 years as a Cardinal fan.

The season was teetering on the brink of falling into the abyss of our worst preseason fears.

I'm still not sure what happened next. All I know is that the season might very well have been saved.

Let me get this out of the way: 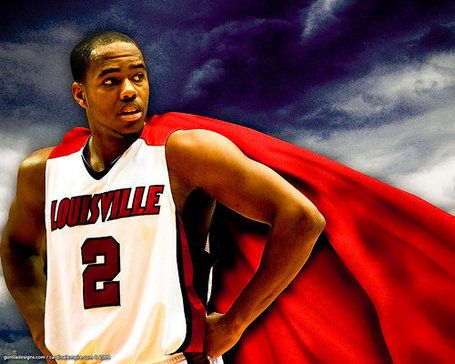 Mr. Knowles is having one of the finer senior seasons in recent memory, and he has proven himself capable of achieving ungodly things in the final minutes of games.

Also deserving a healthy heap of praise are Elisha Justice (who quarterbacked the rally) and Chris Smith.

And then there's Terrence Jennings, the much maligned junior forward whose disappointing season had been lamented by each and every Cardinal fan on the planet. TJ, who appeared destined to finish yet another regressive performance, came up huge down the stretch. He buried four must-have free-throws, grabbed several must-have rebounds, and actually ended up being the main reason the Cards came back to beat the Golden Eagles on the boards.

Just like his team, if Terrence Jennings ends up turning his season around, this will be the day everyone looks back and points to.

I'm typing words here but I still don't feel like I really know what to say, so I'm gonna wrap it up and tell you to go celebrate.