My review of Titanic is coming tomorrow morning.

1. Saturday was the first time I have attended a Louisville loss to Kentucky (4-0 previously...didn't say anything for obvious reasons). It was not pleasant.

I don't handle losses to the Wildcats particularly well anyway, but having to make the walk back to Old Cardinal Stadium with scattered clapping and C-A-T-S chants, an obese woman in a UK jersey laughing obnoxiously behind a fence at everyone passing by and then six Kentucky fans on top of a hill shouting all sorts of things (blacked out) was certainly...an experience. Tupac blasting from an abandoned tailgate was a nice finishing touch. 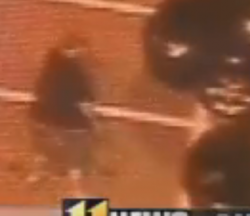 2. As disappointing as losing to Kentucky was, at least it wasn't unexpected (a missed extra point and an unbelievable personal foul penalty away from finally nailing a score). We simply don't have the players to expect high quality football right now, and that's the fault of no one on the field or on the sidelines.

3. The most encouraging thing about Saturday was that this team played four quarters. I was resigned to the fact that Kentucky would pound us on the ground in the final 15 minutes because our guys would be so exhausted, but there  wasn't a player in red who appeared any less willing to compete than any guy in blue on any snap.

A year ago, the defense folds on UK's second-to-last drive, the Cats punch it in with ease and the final score is 30-13. Instead, the front seven sucked it up, played big, forced a field goal attempt and ultimately kept its team in the game.

4. Bilal Powell looked like a completely different player than the one we've seen the past two seasons, and played up to the hype set by his head coach. The fumble didn't end up hurting Louisville in the game, but it was a worst-case-scenario as far as the rest of the season is concerned.

The guy who ran with confidence for the first 45 minutes of the game looked like someone capable of carrying this team to the postseason for the first time in four years.

There should be an asterisk next to Powell's 80-yard touchdown that says Cobb was in the locker room when it happened. I'm only half-joking.

6. When Josh Bellamy went down I wondered aloud and via text just how much it was going to hurt us. No one cared and a couple people were annoyed, but the answer ended up being a great deal.

Bellamy going down left only one receiver on the roster capable of stretching the field, and he had a hard time catching the ball on Saturday. With the exception of the early screen pass,Troy Pascley's four drops were absolute game-changers and you just have to hope he's put them behind him with greater ease than Cardinal fans have.

8. I really like his character and am not convinced that someone else on the roster can play his position better, but Adam Froman simply isn't the caliber of quarterback necessary to achieve success at this level. He doesn't see the field well (50,000 people saw Doug Beaumont wide open in the endzone on our last drive), he doesn't have great arm strength, he's not especially accurate, and I still don't see the tremendous speed that everyone's been talking about for the past year and-a-half.

10. Maybe the biggest letdown of the game was the intro video. It was long, overly dramatic (the names of all the former Cardinals in the NFL is a tad unnecessary), odd (the kid in the U of L uniform did not look like a football player) and then it just sort of ended and the team ran out onto the field to no music.

They could have aired a clip from The Little Mermaid and the crowd would have gone apeshit (and the crowd was great, by the way), but in the future it's probably going to take a better effort to get people up.

The tunnel was cool though. 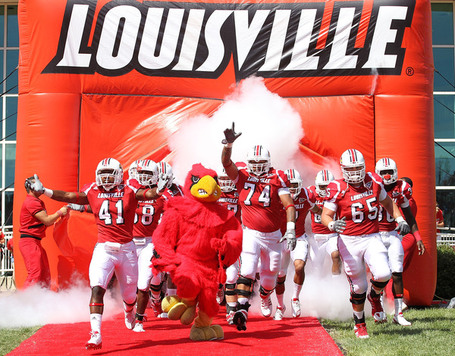 11. Also horrid was the audio. You couldn't make out what Sean Moth was saying at any point during the game, and with one or two exceptions there was no sound to accompany the clips of players telling the crowd to make noise...or do whatever...I couldn't hear it.

12. Chris Philpott definitely lived up to his NCAA 2011 hype.

13. The most depressing thing about all of this is that, aside from the Woodson/Burton team of '07, Louisville has lost four straight games to some very average Kentucky teams. A half decade ago I thought with certainty that it would take Wildcat teams capable of competing for SEC titles to string together this type of streak, but alas...infection.

14. Very surprised that we didn't attempt the onside with just 3:12 to play. All Kentucky needed was one first down to put us in a position where we would have less than a minute to score, and two first downs to end the game. I understand you want to show confidence in your defense, but the odds were definitely stacked against a three-and-out.

15. The future is definitely bright on defense, as a nucleus of freshmen and sophomores held the Cats to three points in the game's final 30 minutes. Hakeem Smith continues to be a very pleasant surprise and is rapidly becoming my favorite non-Titus Tegaue member of the defense.

16. Joker Phillips' set plays were outstanding, and I didn't feel like I could exhale until Kentucky was on its third or fourth set of downs. He absolutely singled out Mike Evans on the game's first play, and it set the tone for a quarter that U of L would never be able to overcome.

17. Mike Hartline will finish his college career 3-0 against Louisville. And none of us can knock him. He did everything he needed to do to bring the Governor's Cup back to Lexington.

18. No too many men on the field penalties, no personal fouls, and no timeouts before extra point attempts.

19. Saturday put to rest the Tupac debate for once and for all: the man is deceased. There is no seven day theory. Back to the drawing board.

20. Ending on the upswing: I watched college football last weekend and there isn't a team in the Big East that I can't at least imagine Louisville beating. That's not necessarily a ringing endorsement of our boys.

Heart alone might be enough on a couple of Saturdays this year, and for the first time in a while there's no doubt that the guys in red and white are going to play with it.