On the absence of "Kentucky Hate Day"

Share All sharing options for: On the absence of "Kentucky Hate Day"

A number of people sent me emails and messages yesterday asking whether there was going to be a Kentucky Hate Day in response to KSR's Louisville Hate Day. There isn't.

Kentucky fans will say it's because there's no possible response to such intelligent writing and groundbreaking creativity (the Facebook thing's been done...there are non-UK athletic web sites out there) or because the superiority of Music City Bowl appearances and really good 19-year-old basketball players speaks far too loudly for any other voice to dream of audibility. And that's fine.

We're not abstaining from a Kentucky Hate Day because we're above it or because we're going to pretend the rivalry isn't that big of a deal.

The reason we're not going to have a Kentucky Hate Day is because there's simply no point.

As true as the above may be, there is absolutely no point in arguing it with a member of Big Blue Nation because nothing you say will make the slightest dent in their exterior. I've tried. Friends have tried. Religious authorities have tried. These men and women will not budge, and they take pride in that.

The Internet has afforded these people the opportunity to surround themselves with media (local...and hit-prostitute Gregg Doyel) that tells them nothing outside of what they want to hear. When a critical national story does slip through the fortress, it's instantly met with cries of "jealousy" or "bias," followed by a shower of outraged emails to the perp, and then it's right back to a blog post with a quote from a friend of Eric Bledsoe's high school English teacher's second-cousin talking about how Eric translated Beowulf into Italian when he was 15.

Kentucky fans are the fat kid in 4th grade who made awful joke after awful joke and insisted on sitting with the cool kids at lunch every day, even though everyone involved was clear on the fact that he wasn't welcome. You can ignore his weekly Friday night flashlight tag invitations with increasing vigor, but he's never going to get it.

It's not the hate from the other side that I mind. There's no reason to feign political correctness or sportsmanship, the backbone of this rivalry is hate. Admittedly, I would be slightly less passionate about Louisville sports if I didn't dislike Kentucky so much, and - while a healthy chunk will never admit it - I think the same holds true for them.

What fascinates and angers me the most about the modern Kentucky fan is the "Louisville cares way more about us than they care about their own team when they don't even really matter at all to us" facet, and how often comments like these are made on Louisville blogs or message boards or, without provocation, to Louisville fans in person.

Take, for instance, the following passage from this Thursday post on KSR.

Rather than cheer for their own team, U of L fans will go out of their way to cheer for "any team playing Kentucky". They will gorge themselves on Big Blue opponents and revel in their crapulence. It is commonplace to see a Louisville fan in Card gear show up to a bar full of Kentucky fans watching UK play an SEC game and actively root for the other team. It is a sad, pitiable state of affairs when you have more hatred toward a rival team than you have love for your own program.

At the end of the day, the most fitting insult is that they simply don’t matter. They are, in every sense of the word, the little brother that tries to copy our success and keeps failing. The fan base is fickle and annoying and the team only has spurts of relevancy before fading back into the background of college athletics. They represent envy in the worst possible way and they want what UK has: A dedicated fan following hitched to a relevant, successful program. A program that is about to go into their house and throw an epic beat down in their direction

If the hypocrisy of this being one of fourteen posts written by Kentucky fans focused solely on disdain for Louisville done for an event titled "Louisville Hate Day" wasn't enough, the picture below was featured on the very next KSR post: 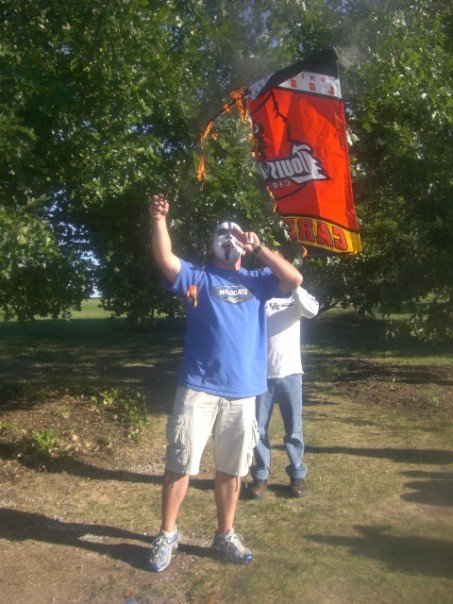 What a laid-back, rational guy focused completely on supporting the home team and not at all distracted or consumed by feelings of ill-will towards that team's arch-rival. A man truly worthy of envy in the worst possible way.

The small penis analogy from a couple of months ago still applies. These guys are going to continue to do and say things that make sense or are funny to no one but themselves. They're going to continue to high-five each other and do the John Wall dance, all while debating which group of outsiders is the most jealous of how awesome they are.

All anyone outside the circle can do is shake their head and wonder how the hell things could have gotten to this point.

We can still hate. There's just no longer any point in trying to make them understand why.