Will you be rooting for Bobby Petrino on Saturday?

Share All sharing options for: Will you be rooting for Bobby Petrino on Saturday?

It seems to be today's pressing question: Will you be rooting for Bobby Petrino and Arkansas when they face No. 1 Alabama on Saturday? 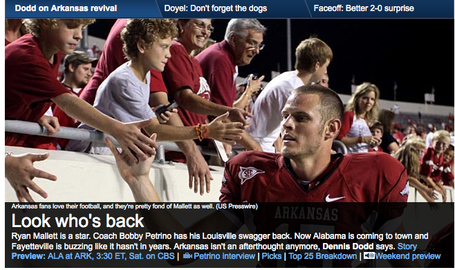 Are you still not over the way Petrino left? Did you not like him to begin with? Has enough time passed to make you respect the fact that he took the program to heights unknown? Does the futility of the Kragthorpe era play a role in your choice?

I think I was as upset as anyone when Petrino left, but there is no part of me that won't be pulling for the Hogs on Saturday. Yes, he was disingenuous, yes, he was a complete dick to the media, but he won football games, his players stayed out of trouble (they really did), and all the people he was in charge of respected him. In my case, the wound has been healed, and I do think a large part of that has to do with how unsuccessful we've been since he left.

That's my opinion, what say you?