I'm aware that it's Thursday afternoon, but this is a bye week. A bye week, for the uneducated, is like a blogger's spring break.

Before diving (literally) into the game, I'm going to quickly talk about some of the highlights from my weekend in Columbus.

The Shoe is enormous from the outside, but it's not quite as awe-inspiring from the inside as I thought it would be. Then again it was noon and I was pretty hammered. Just trying to fit in.

The game itself was uneventful (Ohio holds onto the ball about as well as Highland Middle), but we did have a very solid view of this.

After a couple of postgame pit-stops, me, Ms. CC and her cousin Kelly (who, despite being the petite mother of a 10-month-old son, is more enthusiastic about drinking and watching football than just about anyone I know) were picked up by Kelly's mom and transported to a bar to watch the Louisville game. The setting on the ride over was pretty surreal: you've got drunk Kelly in the front seat, her stone cold sober mom driving, hammered Ms. CC and I in the back, Kelly's infant son asleep between the two of us, and the dirtiest rap songs from the late '90s (Slob on my Knob, Whistle While You Twurk, My Neck, My Back, etc.) coming out of the CD player. Pretty awesome.

We get to the bar, tell the manager that we're the people who demanded they carry the Louisville/Oregon State game, are seated at a table in front of a big screen, and quickly take a necessary shot to restore focus. A pair of Ohio State fans at the table next to us decide it's going to be funny to root for the Beavers out of spite. They exit the building after a couple of death stares and "this shit's not gonna fly" comments. The comments and stares came from Kelly, but I was there too.

We endear ourselves so much to the staff that the manager, Jeff (who earlier took my vow of a pantless victory celebration in stride), ends up sitting at our table to watch the final drive. He walks away quickly after the Froman interception when it becomes apparent that we aren't the "aww shucks, well we just like to have a good time watching the boys play" types of fans.

Kelly's sober husband picks us up and he and I watch the end of the Notre Dame/Michigan State game while the girls pass out in each other's arms (so hot) on the floor.

The prevailing emotion from Saturday's game (for me, at least) was and still is disappointment. This was a game Louisville should have won, and it would have been the biggest victory for the program in quite some time. Still, it's impossible to deny the massive difference in this type of disappointment and the disappointment we became so accustomed to over the past three years.

Saturday was the most fun I've had watching a football game since the Orange Bowl.

The biggest problem I see with our program right now is we have players who just don't know how to win. It was evident on Froman's fumble (DIVE!) and Chichester's penalty and a couple of other game-changing plays.

This is why I hate that the bye week has fallen here. It would be wonderful to turn this momentum into comfortable victories over Arkansas State and Memphis before heading into Big East play where, all of the sudden, anything seems possible.

Still, I'm sure some of the guys are thankful for the break. Take it easy, Doug.

Obviously this was easily the best performance Adam Froman has given to date. They say sometimes when a quarterback starts making plays with his feet that it gets the rest of his game going. I'll buy it, because Froman threw the ball far better than he did against either of the Kentucky schools. He spread the ball around, hit his second or third receiver multiple times and made several big throws on third down.

Froman's heart or desire was never an issue, but Saturday he finally showed that he has the ability to put this team in a position to snag a bowl bid.

The new Bilal Powell is the real deal. This was his worst game statistically and he still looked like a back who could sneak up and steal a spot on the Big East's first team offense at the end of the season. It's getting clearer every game that Sanford and Strong are going to let this team ride Powell as far as he can take them. 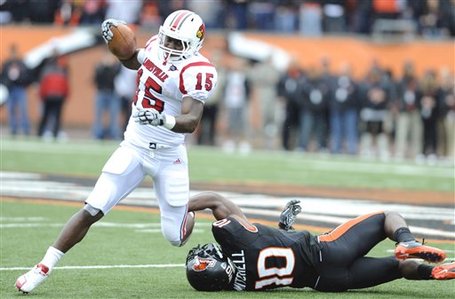 Doug Beaumont's Cardinal career is unlikely to garner the kind of respect that it deserves, and that's really unfortunate. I really, really want his college story to end with a postseason game.

Cameron Graham has turned himself into not only Adam Froman's most reliable target, but, I think, the best pro prospect on the team. If one guy from this team has the chance to hear his name called at next April's NFL Draft, it's Graham, and that's pretty unbelievable when you look at where he was before he came to Louisville and during his first few months here.

It's not a secret that we have to get Vic Anderson going. One of the ways would be to actually give him the ball on one of those read option plays where we're in the Wildcard formation and he comes in motion in front of Powell. You couldn't tell much from the television angle, but against Kentucky it was clear that if Powell had given him the ball either of the times we ran the play that it would have gone for a huge gain. I'm not sure if giving Anderson the ball is even an option for Powell right now. If it isn't, it's something that should be practiced.

Vic also seems to be getting the same treatment from the offensive line that Bilal got a year ago, which is zero blocking (the worst treatment). I'm not sure if it's a mental thing, but there were at least two Beaver linemen already in the backfield seemingly every time Anderson touched ball on Saturday, which was eerily reminiscent to what Powell had to put up with when he got touches in '09.

Sanford doesn't have a lot of offensive weapons at his disposal, but Vic is one of maybe two or three players on the roster with game-changing (for the better) abilities. Getting him more involved has to be a priority.

I'm gonna go ahead and object to this "CardsFan922 Crush Hakeem Smith" business. I saw him first.

After getting picked on a decent amount in the Kentucky game, Mike Evans made a couple of plays that showed how he earned a starting spot during fall camp.

B.J. Butler is going to be good, really good.

Bold prediction: Dexter Heyman is one of our top defenders during the second half of the season and has a monster senior year. He's too big, smart and driven not to.

The signs of life from Josh Bellamy were one of the most positive aspects of the game. He's got to become the big deep threat for this passing game to thrive...or come as close to possible as "thriving."

Our lack of size and athleticism compared to other BCS conference teams might be most evident in our special teams coverage. Doug Beaumont delivered a couple of solid licks on punt coverage against Eastern, but other than that we've been pretty atrocious in kick coverage situations. It really hurt against OSU.

I would have hated it if he'd said it before the season, but I love the fact that Charlie Strong reportedly told his team after that game, "we can win the Big East." The reason? It's true. The odds of it happening are still, I think, worse than any team in the league outside of maybe Syracuse or South Florida, but they're much better, like two or three times better, than they were three weeks ago.

After last weekend, it's not a stretch to say that this U of L team has a legitimate shot to beat all nine of its final opponents. If that's not cause to smile after the past three seasons, I don't know what is.