Share All sharing options for: Prediction On Pacific Time: Louisville At Oregon State

So, I'm writing this post while watching Kansas - Southern Miss and the announcers are doing their "fantasy football" picks where otherwise unremarkable announcers pick a QB, WR and RB each and add up their stats for the weekend, compare head to head, and then I guess the loser has to announce the noon Minnesota-Iowa State game with Pam Ward.  Anyway, this week, each of the three picks a Rodgers from Oregon State.  These two dudes: 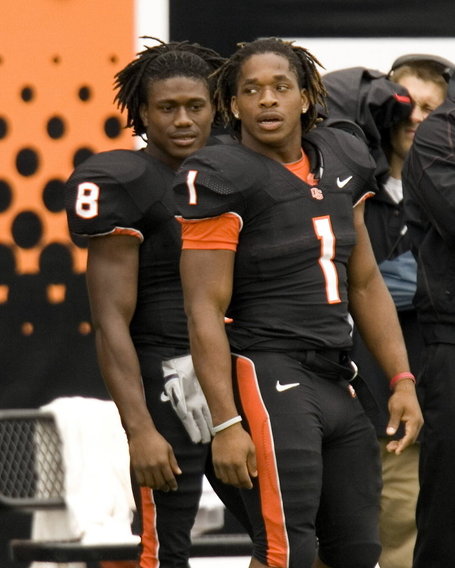 Why? They laughed between them, a laugh that made me sick.  While Charlie Strong will have them back in a few years, they agree, tomorrow Oregon State faces a depleted Louisville team.  That upset me.  But what upset me more was that I agreed with them.  Tomorrow has the potential to get ugly.  With that in mind, here are my pessimistic yet realistic predictions for this week's Super Bowl Orange Bowl game:

First Cardinal Play From Scrimmage:  Two weeks in a row, a basic hand-off started things off.  As a road underdog, the obvious prediction seems to be a more risk taking game plan, but with Oregon State's defense giving up 453 yards to TCU two weeks ago, I'll play it safe here: Powell run off tackle.  What would I love to see?  With a predicted 'all time record for non-conference game' crowd that will probably be loud and hyped, I'd love to see Strong and Sanford try to take the crowd out early with a trick play, misdirection or a screen on first down.  Maybe in 2015 when we go back with some better weapons.

Cardinal Defensive MVP:  New CardsFan922 Favorite Hakeem Smith.  Two weeks in a row, baby.  Mainly because the safeties will be very involved in trying to keep Rodgers from getting out of the backfield.  Smith looked really good against the run last week and made some plays in the backfield, but still got beat on at least one pass play I could see.  I forgive you, CardsFan922 Favorite Hakeem Smith.  I forgive you.

First Cardinal touchdown:  Pass.  And I don't mean "pass" as in "toss the ball in the air to another player on your team."  Rather, pass as in, I don't have the confidence to answer this question.  Then why did I ask myself it?  Good question.

Specific Vision: Whatever hack announcers we get tomorrow more than once confuse Preston and Daniel Brown and give one Brown credit for the other Brown's tackles.

Buried Lede: According to freneblogger Mengus22/Mark Ennis, Justin Burke may be playing tomorrow instead of Adam Froman.  Mike would post what he's heard on it, but then he would probably be mocked again by more respected, higher traffic, profitable internet 'websites.'  I have mixed emotions on this.  My initial reaction after the last two weeks was that Froman just wasn't the guy to win us games this year.  Then I was all like, well, it takes time to put in the spread and he's the best guy for the spread.  But now I'm like, we don't have the weapons for the spread, our best offense has been a traditional offense and Burke would seem to be a better passer.  Further, if Brown really has moved to WR and DaMarcus Smith is the QB of the future, with Powell and most of the o-line made up of seniors, it's not like we really can build for the future by teaching a lot of young guys the spread.  This staff doesn't really have the luxury of choosing between "win now" or "get guys experience now on offense for the future" because the "future" is mostly in high school.  So, Burke gives us a chance to win this year, let's give him a shot.

Oregon State Player Not Named Rodgers You Will Get Sick Of: Meet Suaesi Tuimaunei:

The 6'1'' senior Safety from Hawaii was the second leading tackler two weeks ago against TCU.  The team captain, his hard-to-pronounce-but-interesting name will delight the announcers and he will be heavily involved in the defense, probably even picking off a Froman (or Burke) pass in the second half.   Lance Mitchell, the other safety, is probably the star on defense, but Tuimaunei will annoei you more, I foresee.

Louisville Will Win!  If....OSU turns it over 3+ times, Burke starts and the wide receivers, led by a healthy Bellamy and a breakout game by Andrell Smith, keep getting open and catch the ball.  Powell and Vic run all over a porous Oregon State front 7 that gave up a ton of yards to TCU.  The defense, inspired by the tragedy earlier this week and some bulletin board (IRL bulletin board, online 'bulletin boards' are so 2007) material from the small, fast Rodgers brother, continue their surprisingly strong start to the season and take advantage of the turnovers to either score on their own or give the offense very short fields.  Massive, torrential rain storm negates Oregon State's talent advantage.

Oregon State Will Win! The other 9 out of 10 times.  They still scored 21 on TCU, a team with a much better defense than ours, they have a really good offense and EKU's defense held us to 23 points.  Either Burke or Froman is not going to win a game on the road against a top-25 opponent, if we get down early we are forced to abandon the run and our offensive line gets exposed.  Oregon State is simply a better team, they are playing in their home opener and they win this game without much of a sweat.

Final Score Prediction:   Oregon State 38 - 10 Louisville.  A couple quick scores in the first quarter put this thing out of reach, although the team plays hard and admirably the rest of the game. No matter what, though, there's no way they score as many as Petrino hung on them 5 years ago.  So take that, Beaver fans.