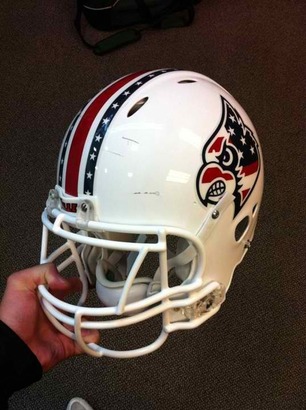 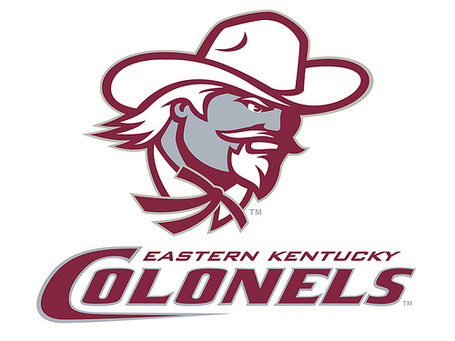 Yes, it's the token post/pre-Kentucky game in-state D-II opponent, but it's still the dawning of the Charlie Strong era and it's still a team that's going to play with a great deal of heart. The helmets also added at least .6.

Game Attire: Grey Louisville football shirt with helmet. Jeans or shorts, depending on the weather.

It's the other new shirt I bought last week. I'm determined to witness Charlie Strong's first victory as a head coach in a virginal outfit.

Ms. CC and her lovable(?) band of sidekicks are in Nashville, so the food game is going to take a serious hit in week two. Feel free to bring some and in exchange I'll make up a story about the time I almost played golf with Lorrenzo Wade.

Both teams had to wait an extra day to start their seasons. Lightning delayed the kickoff Thursday night for three hours before officials finally decided to postpone the game.

Kirby finished 15 of 25 for 199 yards passing, including a 28-yard touchdown toss to Jermaine Saffold. Kirby also scored on a pair of short runs for the Bears.

Goals of the Game:

3) Better flow and execution from the offense as a whole

4) No fumbles from either primary ball carrier

7) Have the game won by halftime

So long as he's healthy. I think you're going to see Strong go back to him heavily just to make sure he shakes any thoughts of last week's fumble and has his mind right before an enormous text next weekend.

--EKU is widely referred to as the "No. 1 STD school in the country" a fact even referenced on the university's official website. A friend (a Western grad) still proudly sports his "EKU has STDs" t-shirt underneath his Cardwear on most game days.

--Louisville’s last loss to a I-AA school was to EKU when the Colonels defeated Louisville 45-21 in 1985.

--The Cardinals are 9-3-1 all-time at home against the Colonels and have won eight of the last nine meetings overall in the series.

--EKU hopes to have cornerback Jeremy Caldwell back at 100 percent tomorrow. Caldwell, a candidate for the Buck Buchanan Award given annually to the top defensive back in the FCS, played just a handful of snaps against Missouri State while recovering from a hernia.

--The Cardinals are ranked seventh nationally in punt return average with a 28.0 yard average, due to senior Doug Beaumont's 28-yard return.

--"We need a win for the players. We need one for their motivation so they realize if they play well they can win." --Charlie Strong

--"You've just to get be patient. We've got some talented guys, but they're young. We know we can go out there and get downfield." --Doug Beaumont

--"I'm not going to lie. I'm going to be nervous with all the fans. They've added on to the stadium, so there will be even more people. I'll probably have some jitters, but after the first play it will go away." --T.J. Pryor

--"(On cornerback Jeremy Caldwell) If the ball is in the air and it's coming his way, you'll want to sit on the edge of your seat. We don't get a lot of those kinds of guys at our level." --EKU head coach Dean Hood

--"Obviously, everybody’s very, very disappointed for Austin Davis. I can’t say that it’s not going to affect us, but I do feel a sense of excitement about seeing how Martevious is going to respond in this situation."--Larry Fedora

--"We need to focus on ourselves, not Eastern Kentucky. I am more concerned about us." --Charlie Strong