Move aside LeBron, there's a new king in town.

Boy ol boy, Miami has sure been the city of attention in the sports world the last year, the whole LeBron saga along with Chris Bosh joining Miami Heat, along with a top wide reciever in the NFL Brandon Marshall being added to the Miami Dolphins, but who would expect this little known Arizona high schoool prospect to join the most coveted city in the sports world this year.

Cotton has accepted to go to Miami-Dade College next year and continue his dominance he showcased in High School, but before we look look at where Bryce will be next year, lets take a look at Cotton's road to the Dade. Tucson's standout slashing star Bryce Cotton's college stock has been a wild roller coaster ride, to start out his Senior season for the Titans, he had major Arizona schools taking an extra look at his talent , one of these schools would be Arizona State University, which eventually stopped eyeing Cotton early on in the season. Cotton would soon catch more attention from a grip of Division II schools after his dominance in Prescott, AZ for the Bradshaw Mountain Holiday Classic tournament, a tournament wwhich Cotton would showcase his amazing leadership and oustanding versitality, and would eventualy be crowned tournament MVP after leading his Titans team 5-0 in the tournamnt to be the Kings of Prescott.

After a fantastic winter break Cotton returned to the court to be in perhaps one of the biggest most memorable games in his life, to face the Titans hatred Rival, the Santa Rita Eagles.

Over hundreds of people from fans, students, teachers, and parents would gather from each school to see the biggest ;most anticipated basketball game in Arizona history, but all eyes were on Bryce Cotton against national ESPNU 150 prospect Terrell Stoglin. As both teams fought it out for 39 minutes, the game would come down to the final seconds, and the ball in Cotton's posession. Storming down the court Cotton rised and fired and burried the free thrown line jumper in the grill of Stoglin as time expired. It was almost like a storybook ending oustoring Stoglin 29-25, but for Cotton, this was only the beginning.

The Santa Rita game would help kick off Cotton's notoriety around Arizona, for days all anyone could talk about was Bryce Cotton. for the rest of the seasons second half, Cotton would average just over 25 points per game, and he gave the fans what they paid to see.

Cotton would rise to the top of the charts in Arizona prospect rankings, but it all changed when he would face off against Stoglin for the second tiime of the season. The house was packed the game was close, the atmosphere was intensifying, for the Titans and Cotton, it was same ol' song, different dance, as Stoglin got the last laugh annd it was his squad that walked off with the victory against the Titans.

Cotton would lead his star-studded team to the state playoffs and would flourish in one of his most emotional games of his life. Just one day after the passing of his wonderful grandmother, Cotton had to put that to the side for just one night, the night of the first round playoff game against Buckeyee High, he would put on a show scoring a career high 40 points, talk about overcomming adversity. After leading his team to a final four appearence, he would have to square off with Maryland bound Terrell Stoglin one more time, and Stoglin prevailed once again to break the tie breaker. This would eliminate any D1 schools looking at Cotton, because of the overshadowed success of Stoglin.

I had the opportunity to make friends with Stoglin and be in touch with him about his recruitment, hee notified me that both Illinois and Oregon needed a point guard and that theye were there to watch his show off his talents in a late summer showcase.

"St. Johns wanted my transcripts," Cotton said text while in Phoenix for a showcase, "Drexel talked to me as well."

But unfortunatly, it was too late and all of those D1 schoools on Cottons radar would soon fall out.

According to AZ STAR NET "As far as waiting until the last minute, if you can't find a D-1 scholarship, this is absolutely the best thing that could happen," Palo Verde Coach Klassen said. "There's no doubt in my mind that big things will be heard from Bryce over the next couple years."

Cotton isn't complaining though, he is looking forward to going to South Beach to play ball for Miami Dade, annd whoo knows if he shows South Florida what he is all about, then he could spring up back in the ranking and possibly be a JUCO transfer to a D1 school, we wish the best of luck for Bryce Cotton and his family the next four years. 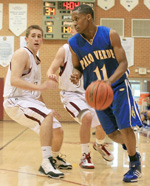 (tell me what you think about it guys)