Royse will start against Vanderbilt in regional final

Share All sharing options for: Royse will start against Vanderbilt in regional final

For the second time in as many years, Louisville and Vanderbilt will meet in a winner-take-all Monday night regional final.

The Commodores smoked the host and top-seeded Cardinals 7-0 Monday night to set up the third meeting between the two in this regional. U of L prevailed 7-1 on Saturday night and topped Vandy 5-3 a year ago to move on to the super regional.

With his team's season on the line, head coach Dan McDonnell - who will return after serving a three-game suspension - will hand the ball to Big East Pitcher of the Year Thomas Royse. Because of illness, Royse (9-1) has not appeared in the regional tournament.

The Cardinals must bounce back a night after they were held to just two hits and zero runs by a pitcher, Ritchie Goodenow, who was making his first start of the season. Goodenow's success would lead one to believe that Vandy coach Tim Corbin will take his chance with another left-handed hurler tonight. Grayson Garvin and Sam Selman are the two most likely candidates. 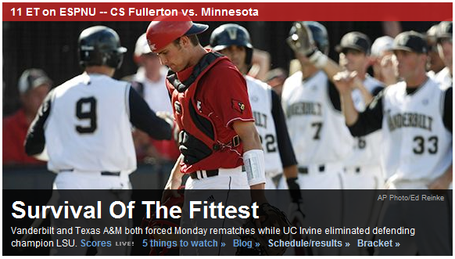 The biggest factor Sunday may have been the fact that the website CardChronicle.com opted not to post an open thread or a picture for the game, a technique which had resulted in a pair of Cardinal victories by a combined score of 18-3. Blog proprietor "UL is my hot hot sex" could not be reached for comment.

The season comes down to tonight. Go Cards.