Share All sharing options for: OK, did Demar Dorsey commit to Louisville? 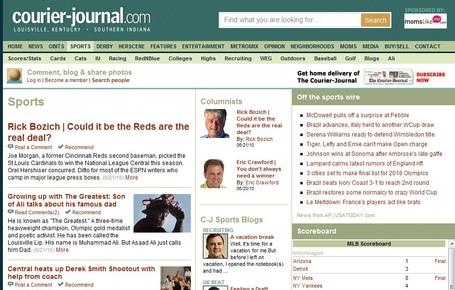 It's certainly not every day that the Louisville football program lands a player who ESPN has rated higher than any other class of 2010 recruit in the Big Ten. If a basketball player of this caliber had committed to either U of L or UK then I'm pretty sure we'd all know his favorite cereal by now, and that's the sport where the local schools are supposed to be landing the best in the country.

This is a gigantic story with a number of angles (non-admittance to Michigan, Charlie Strong connection, perhaps the most-prized defensive recruit in Cardinal football history) and yet when Louisvillians click on the C-J sports page this morning they're greeted by a Rick Bozich column (From when? Today? Sunday? Friday? Does anybody know anymore?) asking whether or not the Reds, the same Reds who managed just one run while being swept by the hapless Mariners over the weekend, are the real deal. Then you have a story on Ali's son (the equivalent of ESPN airing a Yankees/Red Sox special), a wrap-up of the Derek Smith shootout and a piece on an Indiana golfer who won a Challenge Tour event. I won't read it, but I can only hope the guy from the AP who penned it explained what the Challenge Tour is.

Bashing the local paper is as American as paying too much for bad beer and will be in style so long as the medium exists in any form. A lot of the time it's unwarranted and we usually try to give the guys at 525 West Broadway the benefit of the doubt, but this was a dropped-ball situation that demanded a call out.