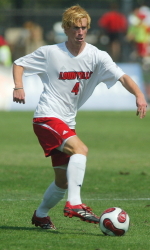 "It's the ultimate dream for any footballer to play for the World Cup," said Clapham. "Growing up in New Zealand you're never really sure it will happen to you. Then to be in camp with the team and then to finally be in the squad, it's absolutely unbelievable. It hasn't really settled in, it's so exciting. Every day, since I was a little kid, I hoped and dreamed this would happen."

The All Whites, ranked 78th in the world, start Group Play on Tuesday morning at 7:30am ET against 34th-ranked Slovakia. The game will be broadcast on ESPN2, XM Radio and several internet streams.