Share All sharing options for: On Samardo Samuels' early departure

--I'm not sure anyone knows exactly what transpired during Samardo's two-month decision-making process, but here's my understanding of the sitiuation:

Like most national high school players of the year, Samuels was thinking NBA before he ever stepped foot on a college campus. He never expected to be here more than a year. For this or whatever reason, Samuels became increasingly unhappy at Louisville during his sophomore season and his desire to flee increased that much more. Still, before he went home to Jamaica, the consensus was that Samuels would suck it up and return for another year before going through the draft process for the first time.

Understandably, Samuels' family - which has heard about how great he is and how much money he is going to make for years now - is having a hard time understanding why Samardo all of the sudden might not be good enough for the NBA. They think he's ready to get paid to play the game, and my guess would be that Samardo either believes the same thing or doesn't have the heart to tell them they're wrong.

Either way, the decision has been made and I wish nothing but the best for the young man and his family.

Samuels probably isn't going to be drafted, and even if he is he almost certainly won't make an NBA roster next year or any year. But here's the thing: I don't think Samardo would have been drafted in 2011 or 2012. He's done growing and regardless of how hard he works, he simply doesn't possess the natural athleticism to play the four in the league.

If his family's financial situation is that bad and his paycheck two years from now would look very similar to the one he's about to bring in, then he'd be a fool to stay.

--And just like that, Terrence Jennings becomes arguably the player most paramount to Louisville's success (or failure) in 2010-2011.

If given the option, I would have chosen for Samardo to stay, but I'm not going to lie and say that TJ playing 25+ minutes a night and not having to nervously glance at the bench every time the other team scores doesn't excite me.

This is an enormous opportunity for both Terrence Jennings' present and his future. The people who have said for the past two years that TJ had more pro potential than Samuels weren't just exaggerating to make a point; he's taller, he's longer and he's more athletic than the guy who has started over him since he's been at Louisville.

The possibility of Jennings thriving this offseason and becoming a monster as a junior is one of the most exciting aspects of the upcoming season.

--Congratulations to reigning Kentucky Mr. Basketball Elisha Justice on becoming the latest basketball player on scholarship at the University of Louisville. Not only is this a blessing for the Justice family bank account, but I think being on scholarship also does tremendous things for a player's psyche.

--In terms of starting spots and playing time being up in the air, I don't think there's ever been a Louisville basketball offseason as important as this one.

For the Cards to see success in 2011, multiple guys from the group of Mike Marra, Jared Swopshire, Kyle Kuric, Rakeem Buckles, Stephen Van Treese, George Goode and Gorgui Dieng need to take dramatic steps forward over the next couple of months. What takes place this summer could easily be the difference between playing 22 and eight minutes a game for all of these guys.

Samuels' departure means that Goode vs. Van Treese is the latest big battle to keep an eye on. One of these guys is going to be asked to contribute more than they could have ever imagined three months ago. 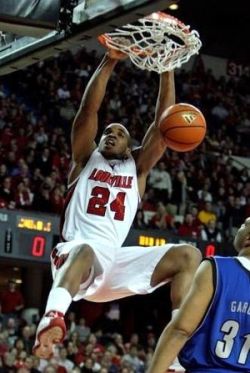