Share All sharing options for: Hump morning musings in Louisville

The big news yesterday was Preston Knowles punching somebody in the face...apparently pretty hard and probably more than once.

We love Preston here (understatement), so naturally the first instinct for most of us, myself included, was to make some sort of joke, but the reality is that this isn't cool. The only facts we have are that the man with the shiners is Preston's girlfriend's stepfather, PK claims he was acting in self-defense and that the argument started over a hairbrush.

There were a number of reasons the Louisville basketball team didn't win a game in the NCAA Tournament a season ago, not the least of which being lack of leadership. Knowles will be the only senior on the 2010-2011 team and was the obvious choice for captain 48 hours ago. Restraint would have been the better choice.

See? I just can't lambast the young man with a straight face.

You could interview every player on a major college football team for 30 minutes and you probably wouldn't get information nearly as compelling as something in one of their 16-word tweets from later in the day.

Case in point: via twitter, 2008 Big East Rookie of the Year Victor Anderson announced yesterday that he may be moving from running back to slot receiver.

If true, I love the move.

Mike Sanford is going to try to get his most talented players on the field at the same time (something Kragthorpe only talked about) and that means VA, the most versatile back on the team, likely gets the honor of playing the role Percy Harvin did at Florida (future CatsPause thread: "LOL!!!!! Tard fans think Anderson > Harvin!!!! LOL!!!!!!").

The move would also signify a strong show of confidence in both Bilal Powell, a senior with a history of putting the ball on the ground, and Jeremy Wright, a redshirt freshman, both of whom had very good springs.

Final thought: I'm also going to wager my annual salary (600 non-transferable PayPal dollars) that we see Vic Anderson line up at quarterback on multiple occasions. He's not only the best fit to run the Wildcat, but he's also got the ability to chuck the football if defenses overplay the run. 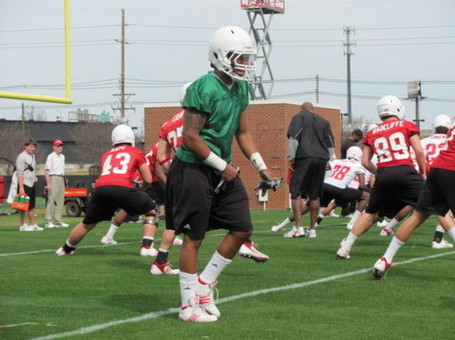 It might not seem like the U of L baseball team has a whole lot to play for at the Big East Tournament in Clearwater, Fla. this week. The Cards are already ranked in the top ten and are virtually assured of being named one of the 16 regional hosts, but a conference tournament title would mean a little bit extra for a couple of reasons this season:

1. The four wins it would take to bring the title home would mean the team would have hit the 50-win mark for the first time in program history.

2. It might be the difference between Louisville, which is ranked in the top ten in most national polls and has an RPI of 7, being named one of the top eight national seeds and not.

The Cards take the field for the first time this evening at 5 p.m. against eighth-seeded West Virginia.

I've heard a lot of complaints about Kentucky Sports Radio's Matt Jones again co-hosting The Afternoon Underdogs on WKRD "Cards Radio" earlier this week. I can only partially understand the outrage.

If you're that worked up about this, then the solution is fairly simple: listen to WKRD when Matt isn't on and turn it off when he is.

The powers that be at 790 wouldn't reach out to Jones, who has an almost unfathomable Internet army behind him, if they didn't need the ratings, so if you don't listen to The Dogs on a regular basis then you really have no place to bitch.

And if you just can't help but listen to the show when Matt is on, then yeah, prepare yourself, because he's going to say not-so-nice things about Louisville (inside info.: he doesn't completely mean all of them). There would be no reason to bring him in if he wasn't going to draw listeners and spark conversation, and what better way to do both then talk bad about a rival on the rival's radio station?

I can count the number of times I've listened to sports radio in the past year on one hand, but if it's your thing then at least accept it for what it is: people with sports knowledge probably similar to that of your own attempting to generate a response. Nothing more, nothing less. 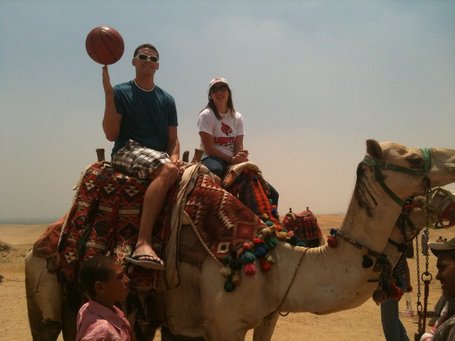