J.J. Ethel's pinch-hit, three run home run with two out in the top of the ninth kept Louisville's Big East regular season title hopes from being all but dead as the Cards stunned host Notre Dame 6-3 Thursday evening. 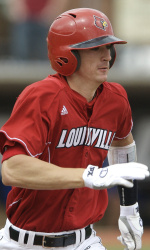 It was just Ethel's second home run as a Cardinal, but it provided (astoundingly) Louisville's 22nd come-from-behind victory of the season . The Cards (44-10, 19-6), who got a solo home run from catcher Jeff Arnold one batter later, have won a remarkable 14 games in their final at-bat.

Junior Neil Holland pitched a scoreless ninth inning to earn his 14th save of the season and add to his school record single-season save total. Tony Zych (3-2) pitched 1.1 innings of perfect relief to earn the win. Junior righty Thomas Royse finished with the no-decision after allowing three runs on four hits whine fanning six over 6.2 innings.

The win kept the Cardinals a half game behind Big East-leading Connecticut with two games to play for each. The Huskies defeated Seton Hall, 7-2 on Thursday.

The Cards and Irish will go at it once again this evening beginning at 6:05 p.m., while first pitch in Storrs is slated for 1 p.m.