NKU exhibition will be first inside KFC Yum! Center

Share All sharing options for: NKU exhibition will be first inside KFC Yum! Center

I swear to god, this exclamation point has already taken three years off my life.

The University of Louisville men's basketball team will play its first official game in the KFC Yum! Center against national runner-up Butler, but the new arena will actually be (unofficially) christened weeks earlier during an exhibition game against Northern Kentucky.

Exhibition games featuring NKU and Kentucky Wesleyan have been tentatively scheduled for more than a month, but the Cincinnati Enquirer confirmed yesterday that the Norse will get first crack at U of L inside the new arena.

"This (opening the KFC Yum! Center) is an unbelievable opportunity," NKU coach Dave Bezold said. "It's hard to even put into words." 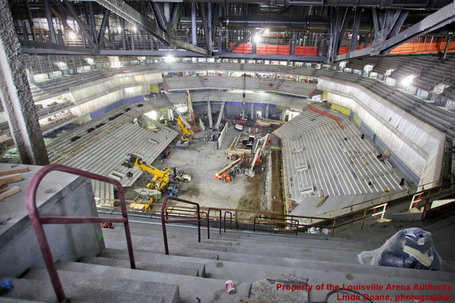 You can check out some fresh pics of the new arena at its official Facebook page.