The Louisville baseball team scored eight runs in the first inning en route to a 14-3 thrashing of Eastern Kentucky in the team's final regular season game at Jim Patterson Stadium.

U of L, ranked anywhere from 10th to 13th in the major national polls, figures to have a good shot at getting at least another couple of home games once the NCAA Tournament begins in a couple of weeks.

Leading the first inning charge for the Cards was center fielder Josh Richmond, who is back after missing 41 games because of a bone he broke in his left hand on March 3. The junior returned to action this past weekend against St. John's and belted his first home run of the season last night, a three-run blast over the left field wall.

"The expectations were very high for Josh going into the year," coach Dan McDonnell told The Courier-Journal. "We were fortunate to win without him, so to get him back and competing in our lineup, the thought is, how good can we really be?" 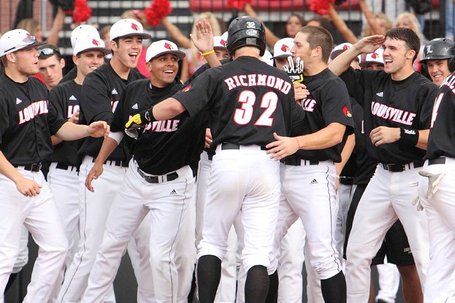 Louisville now turns its attention to a season-ending three-game set at Notre Dame. The Cards trail first-place Connecticut by just a half game in the race for the Big East regular season title. The Huskies have the benefit of hosting 11th-place Seton Hall this weekend.

U of L's series-opening tussle with the Fighting Irish will be televised by ESPNU Thursday night at 6 p.m.