I'm a fairly agreeable chap. Most people seem to be tolerant of my presence and, for the most part, I like them too.

When I think about it, there are really only four things a person can do to get themselves unequivocally over the line and onto my bad side:

2) Shamelessly insult someone very close to me

4) Promise to give me free stuff and then never deliver

The following is the story of a blatant and extreme case of No. 4.

Most of you reading this probably know who Jeff Goodman is. Writes about college basketball for Fox Sports, has a blog that provides great hoops information during the offseason, seems to anger Kentucky fans at least once a month, still has an AOL email; sounds like a person I should like.

He isn't. You're about to find out why.

Hours before the opening game of the 2009-2010 Cincinnati Bearcat basketball season, Mr. Goodman decided to hold a contest on Twitter. He asked anyone following him to guess how many shots freshman Lance Stephenson would take that night and promised a prize for the winner. I submitted a guess and hours later received an email from Goodman notifying me that the contest was over and I had emerged victorious. 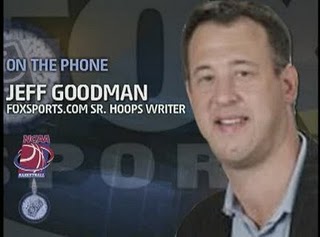 At first I was more surprised than anything, seeing as how my guess was two whole shots off of Stephenson's final total. I suppose the competition was either very thin or very bad, but that's really neither here nor there. Anyway, Goodman asked me to email him back with my address (I obliged) and promised to "think of something cool to send."

A shirt? A hat? A life-size autographed cut-out of Anthony Grant? My mind was doing Mr. Parker circles.

After Goodman had the nerve to show up for Louisville's home game against Villanova and failed to offer a taped apology to play on the scoreboard, I'd had enough. I called him out on Twitter for his indiscretion. The world waited on a response.

goodmanonfox I am still trying to get a T-shirt or a hat from FOX for myself! Send me another email to jngoodman@aol.com with ur info.

I opted to swallow a bit of pride and ignore both the blatant lie (Goodman can't get a Fox hat? Right, and Kobe's been working on getting me those Lakers shorts for months) and the exclamation point, and emailed Goodman once more with my home address.

It's now been three and-a-half months, and I think you can guess how many packages Card Chronicle Headquarters has received from the Goodman Underground Lair. It rhymes with "hero," a title Mr. Goodman has certainly proved himself unworthy of (Pulitzer line).

I'm now calling on the nation to take a stand. Until I receive my major award, read nothing on the Fox Sports website, watch nothing on the Fox family of networks, and have nothing fixed on your car at a Mr. Goodwrench. And if you're looking for a snack and reach for a Mr. Goodbar...well, enjoy your tiny room in hell.

Think Strong. Card Strong. Goodman's A Welcher And Must Be Boycotted Strong.