Share All sharing options for: The 2009-2010 Louisville Basketball Awards Show

We've now officially entered that awkward post-Derby phase where it's still too early to talk about the UK football game and all of us are trying to figure out how much we really care about U of L baseball. The good news is that the worst days of basketball withdrawal (think Trainspotting) are well behind us and the transition to our summer selves (read: normal human beings) is either complete or nearing its conclusion.

Love him, hate him or like him but still get kind of annoyed by the way he plays sometimes, this team was only performing to its potential when Sosa was. In his senior season he averaged career bests in points, assists, field goal percentage and three-point field goal percentage.

Last game in Freedom Hall, defeating the No. 1 team in the country, securing a spot in the NCAA Tournament; honestly, I think March 6 felt more like what I imagine celebrating a national championship would feel like than the day in '05 when we beat West Virginia. It was an unofficial holiday unlike any I've ever celebrated and any I'm likely to celebrate. 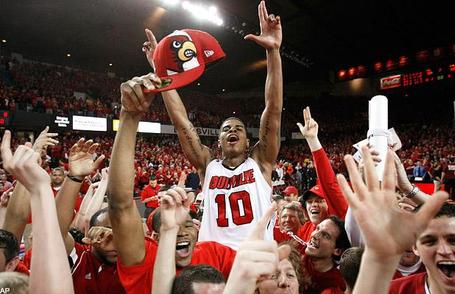 A tremendous game against a scrappy, Gody-less Fighting Irish squad which, in hindsight, may have been the difference between the NIT and the NCAA Tournament for U of L.

Questionable calls made the losses to West Virginia, Pitt and Seton Hall extremely difficult to swallow, but being blown out by a St. John's team that, at the time, had just two Big East wins was the low point of the season. When Louisville walked out of the Garden on Feb. 11 it was one game above .500 in the conference and unquestionably on the wrong side of the NCAA Tournament bubble. Though the situation would be remedied just days later at Syracuse, this was a bad night.

I remember that I attended this game, and literally nothing else. Did Brickley play? Was there a jump rope involved at some point? Hoola-hoop? Goo from My Borther and Me?

Pretty stiff competition in this category, but the four-handed slam earns the title due to shear ridiculousness.

It's like how Brad Pitt or a Brad Pitt movie is nominated for an Oscar every year: we just want him at the ceremony.

MOST MEMORABLE MOMENT: "I F'ing love you, man"

Jerry Smith and Edgar Sosa dealt with more adversity during their senior season than I would assume either had anticipated, and they earned that moment following Sosa's heroics against Connecticut in Storrs.

Anything else that happened in the second Syracuse game

Combine some shaky WHAS coverage with the worst opponent on Louisville's schedule, and hilarity ensues.

The 101 awful jokes made in an attempt to impress the girl next to him were enough to warrant a nomination, but it was the steady stream of indisputable facts like Jared Swopshire being left-handed, Reggie Delk being a sophomore and Samardo Samuels hailing from Haiti that secured the award for this odd-looking young man.

Obliterated Guy With Ridiculously Good Seats (Syracuse game) - What's your M.O. when you have amazing tickets you could probably sell for $500 to what will end up being one of the most memorable games in Louisville basketball history? Well if you're this guy it's be blacked out 30 minutes before tip and then stumble up the stairs before halftime never to return again. At least it was worth it.

Danny Sinnard (Georgetown Exhibition) - Yes, he's one of my best friends and yes, he brought me to the game, but when you make ridiculous comment after ridiculous comment in a completely shameless effort to get mentioned on an obscure, team-specific college sports blog, you have to be called out.

Scoring 16 straight points in the final six minutes of a game and finishing with 36 for the night will generally earn you this honor.

This was setting up to be the Giants/Braves '93 pennant race of sartorial supremacy when former champ George Goode went down with an injury early in the season, but Smith must have had his brother take him on a shopping spree over Christmas break because the junior-to-be ended up running away with this title.

Sosa's jumper to tie the Kentucky game - Literally through my right arm out. Lost my shot at the show.

Preston three from the corner against Pitt - I don't even remember the exact situation, just thinking that my celebration was about three times as intense as anyone else in the room.

All it did was free up the Human Cartoon to succeed Coach K and prolong the Duke era of college basketball by another couple of decades. 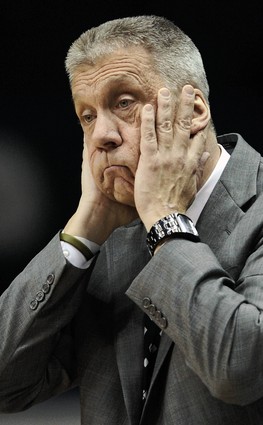 MOST ANNOYING PERFORMANCE BY AN OPPOSING PLAYER: Lance Stephenson (Cincinnati)

You can't go left and that two-game run in the Big East Tournament will end up being the high-point of your post-high school career.

Chris Wright (Georgetown) - Talking shit on Twitter and then backing it up...annoying.

You know what? I'm still not over it. I want Kitts banned from the Garden next year, too. And I want him to take me to Red Lobster. We can split the bill, I'd just enjoy the company.

Only funny because I think five people brought it up dead seriously before it morphed into a joke.

Being down five at halftime

I imagine this is how I will begin every morning beginning around Oct. 15 or so.

This may not have been the season that most of us were envisioning this time a year ago, but its unpredictability made for some great times on this blog. What's truly amazing is that Card Chronicle nearly doubled its traffic a season after Louisville was the Big East regular season and tournament champion and the No. 1 overall seed in the NCAA Tournament.

Thanks to all of you for making this such a wonderful refuge.