The day blogging gave back

Share All sharing options for: The day blogging gave back

The benefits of sports blogging are sometimes easy to lose sight of.

The time demanded to do this at least moderately well is relatively high, the pay isn't existent great and it's impossible to talk about anything blog-related while sounding anywhere near cool. I've tried. Like 1,000 times. I could nail Jessica Biel tonight, blog about it tomorrow morning and still get made fun of by asthmatic 9-year-old nephew if I brought up the post that afternoon.

Still, this gig isn't without its perks, perks which I will now list for both your enjoyment and education:

2. Complimentary comments and emails from normies folks like you.

3. It's a solid release on days where the real world has been particularly stressful or disrespectful.

5. Sometimes readers offer to give you stuff for free, be it tickets, beef jerky (delicious, Danny) or herpes (less delicious, Deb).

7. If people are promoting sports books or magazines, they'll sometimes give you a free copy if you say that you'll discuss it on your blog. Here's the kicker: you can read two pages of the book, burn it, write that the author didn't graduate from middle school, and then go ahead and chalk the whole experience up as a win.

9. You will be recognized in public as many as two times by people you don't know. One of the people you are with will think this is cool, everyone else will be twice as creeped out by you as they were before the evening began. Again, you chalk this up as a win and move on.

10. If you write something particularly inspiring or thought-provoking, the national media sometimes links to or comments on your story. The same holds true if you watch a Dick Vitale-called game and list the non-pertinent nouns that come out of his mouth.

11. People will high-five you in public. Like everyone. It's awesome. Except when you're pissed, then it's more of a chore than anything. This probably should have gone on the in-between list. Really wish my back space button worked. 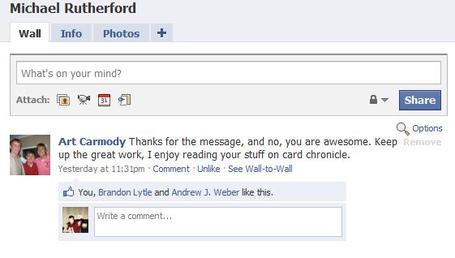 Worth it. Every second.